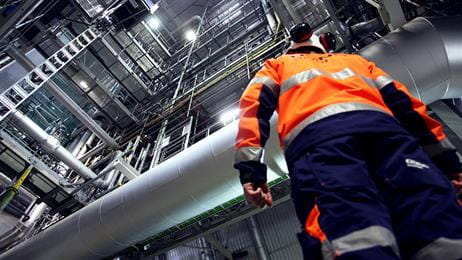 On Sunday, 7 May 2017, the technicians began firing up the first of the two wood chip boilers.
On Monday, 22 May at 16.40 CEST, the new wood chip boilers at Skærbæk Power Station supplied the first green district heating to the district heating customers in the Danish Triangle Region. This marks an important milestone in our work on ensuring green heating to the Danish Triangle Region at competitive prices and with a continued high level of reliability of supply.

"It marks the achievement of an important and specific goal that we've been able to supply the first green heat from the Skærbæk Power station to the district heating customers in the Triangle Region," says Leif Høgh-Sørensen, Project Manager in DONG Energy.

Since DONG Energy and the Danish heating company TVIS in June 2014 agreed on a new heat agreement which will remain in force until 2037, intensive work on expanding the Skærbæk Power Station with two new wood chip boilers and associated logistics for handling of wood chips has been carried out.

On Sunday, 7 May 2017, the technicians could begin firing up the first of the two wood chip boilers, and after a thorough steam blowing of the boiler pipes, the boiler has been connected to the district heating system and can now start supplying green district heating.

"One of the two new wood chip boilers is now generating green district heating, and we expect to begin firing up the second boiler during the next couple of weeks. In September, when heat is once more in demand, we'll initiate extensive tests and trim the system, so that we're ready for full production when the heating season begins in earnest in the autumn," said Leif Høgh Sørensen.

The environment comes out on top

"Many years of hard work preparing the heat supply in the Triangle Region lies behind this important milestone. Once the biomass-based heat has been fully implemented, district heating in the Triangle Region will be 95% CO2 neutral. Whether you live in a newly-built low-energy house or a multi-storey building from the '70s, you show consideration for the environment by having district heating, while the heating from TVIS will become cheaper," says Anders Jepsen, Head of Project Management at TVIS.

When up to 450,000 tonnes of sustainable biomass in the form of wood chips replaces the use of natural gas, the CO2 emissions from the heat production at the Skærbæk Power Station will be significantly reduced.

The wood chips primarily come from by-products, such as branches, twigs and thinning trees, and all DONG Energy's wood chip suppliers must ensure that the wood chips come from sustainable forestry where the forests are replanted, and biodiversity is protected.

The conversion of the Skærbæk Power Station is an important step towards reaching DONG Energy's goal of converting its energy production and reducing its CO2 emissions from electricity and heat production.