The conversion of Skærbæk Power Station is moving forward

They are digging, casting, piling, welding and much more at Skærbæk Power Station. Approximately 50 people are working full time on the conversion. 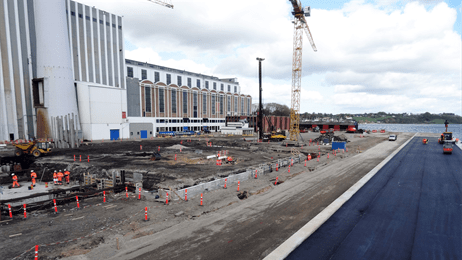 The conversion of Skærbæk Power Station is in full swing. To the left, you can see unit 2's chimney which is to be fitted with new flue gas pipes, and the works on casting the foundation for the future wood chip boilers. To the right, you can see the new 250m long quay.

The conversion at Studstrup Power Station

See how to make room for 65,000 tonnes of wood pellets at Studstrup Power Station

There is plenty of activity at Skærbæk Power Station. The renovation of the power station's 250m long quay is almost complete, and the casting works related to the renovation of the quay have been completed. Now, the contractors have initiated the digging and piling works in the area west of unit 3 at Skærbæk Power Station where they are making preparations for the construction of the future wood chip storage facility.

The remains of the two ash silos, which were demolished by explosives in February, have also been removed, and this has made room for the construction of the foundation for the future wood chip boilers.

"The installation of the boiler itself is scheduled to begin after the summer holidays, but before that we'll install two new flue gas pipes in the existing chimney of unit 2. The flue gas pipes will be lifted into place in the chimney by means of a gigantic mobile crane which will lift the approximately 16m long flue gas pipe sections down into the 120m tall chimney."

If everything goes according to plan, the new flue gas pipes will be installed during a weekend at the end of June, using a total of approximately 16 lifts. But according to Leif Høgh Sørensen, the operation depends on favourable wind and weather conditions as we will be working with large loads at a height of 145m.

The quay is put into service

In June, the newly renovated quay at Skærbæk Power Station will receive the first port calls as the first major components for a new smoke condenser will arrive by ship.

"Already now, we'll benefit from the newly renovated quay as we can have large components for the plant transported directly by ship from the manufacturer's fabrication sites. This results in a shorter installation time at the construction site."

At the moment, the contractors have about 50 employees on site in connection with the ongoing activities.

Leif Høgh Sørensen expects that DONG Energy can start commissioning of the plant in the autumn of 2016, enabling the power station to supply district heating based on wood chips in the heating season 2016/17. The entire conversion of Skærbæk Power Station, which also includes commissioning and service trials, is expected to be completed in April 2017.