Cooperation between Chr Hansen and DONG Energy has paid off 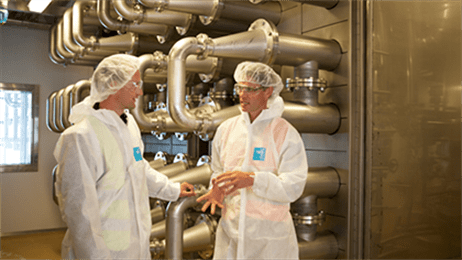 Chr. Hansen has completed five projects in the period 2013-2014 and has achieved annual energy cost savings of 5,300MWh. This amount equals 16% of the energy consumption in terms of their consumption in 2012.

The repayment time for the required investments has been a bit less than a year, and financially speaking, Chr. Hansen has achieved an annual cost reduction of 1,500,000 Danish kroner.

DONG Energy and Chr. Hansen have achieved considerable energy savings together. This has great importance both to Chr. Hansen, to the environment and to DONG Energy.

During the past 18 months' cooperation with DONG Energy, the global supplier of bioscience based ingredients to the food, health and animal feed industries, Chr. Hansen, has reduced its energy consumption by 16 per cent at the Copenhagen Culture Plant in Avedøre near Copenhagen. This equals cost savings in excess of DKK 1.5 million.

Lars Stern, Project Manager at Chr. Hansen, and Jens Christian Aggerbeck, Energy Consultant at DONG Energy, got together in 2012 to find out how they could successfully organise their cooperation. To begin with, the cooperation focused on one single production line. Today, DONG Energy provides energy consultancy services to every single Chr. Hansen plant in Denmark.

"Our cooperation benefits from commitment from both sides. At DONG Energy, they don't have a short-term profit approach, and they don't want to clean us out. This has provided a good basis for the cooperation."

Among other things, Jens Christian Aggerbeck and his team used experience gained from the cooperation with Novo Nordisk and came to the conclusion that the method could be reused at Chr. Hansen. Therefore, they began looking at similar processes at the factory, the Copenhagen Culture Plant.

"In cooperation with ECOlab, we had particular focus on the factory's cleaning processes. Rather than cleaning their production equipment in hot water, hot acid and hot base, we looked into the possibility of cleaning them in cold water instead."

They also considered the lighting, isolation of the production equipment and cooling, which have collectively resulted in significant cost savings.

"We've ambitious targets and we take action. We're measured against these actions. The company benefits from the major cost reductions and they contribute to maintaining the competitiveness in the Danish production because it's becoming far more energy efficient."

"It also means that we help shoulder an important societal matter as regards reaching the Danish targets for reducing CO2 emissions. I'm pleased that I can contribute to this thanks to my work as energy consultant," Aggerbeck concluded.