Ørsted and Enefit have today signed a memorandum of understanding (MoU) which outlines a vision for becoming the leading offshore wind developer in the Baltic countries. 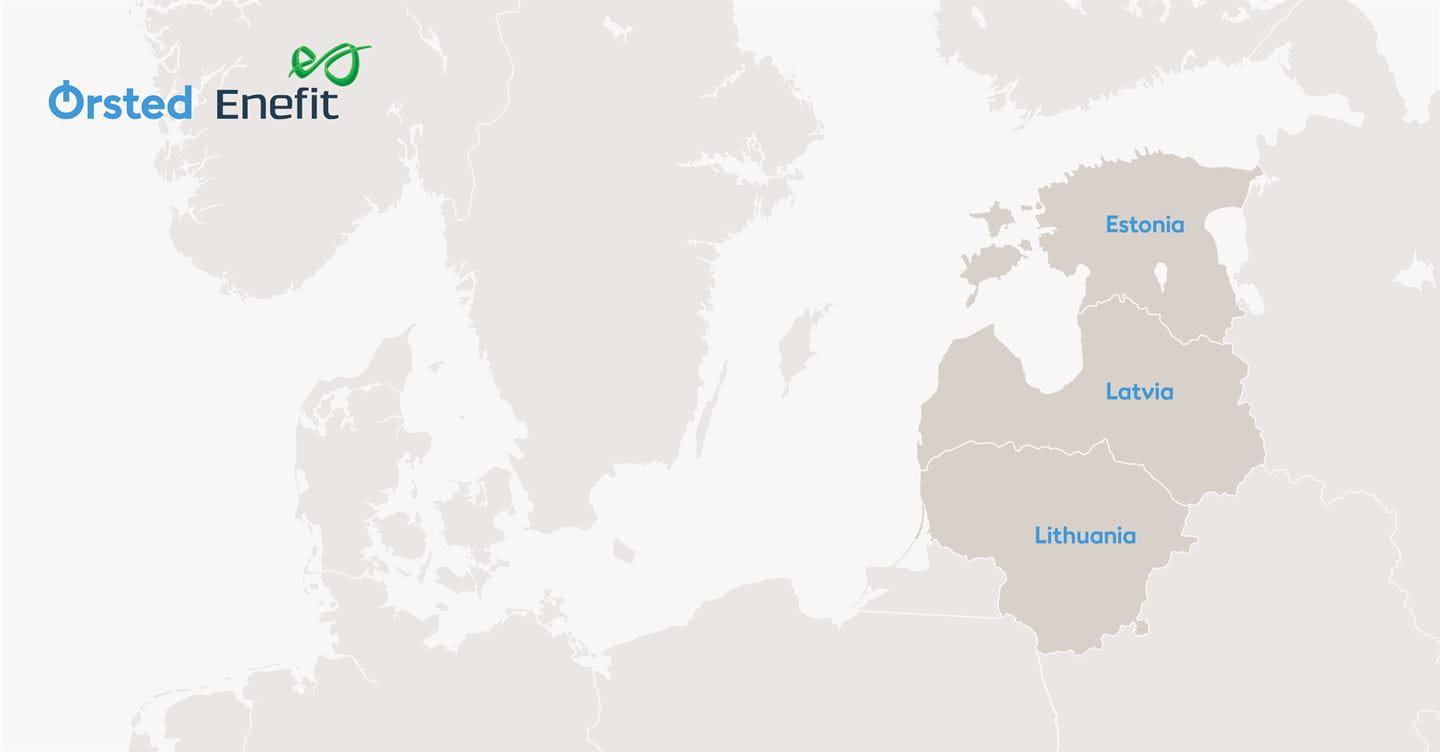 Ørsted, the global leader in offshore wind, and Enefit, a leading utility and the largest wind energy company in the Baltics, have today signed a memorandum of understanding (MoU) which outlines a vision for becoming the leading offshore wind developer in the Baltic countries. The MoU also sets out a vision to jointly move towards delivering the first offshore wind farm in the Gulf of Riga in the Baltic Sea, before 2030.

In September 2020, the Latvian and Estonian governments signed a memorandum of understanding for a joint offshore wind farm, and, subject to a supportive regulatory framework for offshore wind being in place, it's Ørsted and Enefit's ambition to deliver this before 2030.

Offshore wind offers a clear green path forward for the decarbonisation of the Baltic countries and will be able to deliver large-scale, zero-carbon electricity before 2030. Drawing upon Ørsted's proven track record within offshore wind, and Enefit's strong local presence, the partnership is strongly committed to supporting the governments across the Baltic countries in realising their plans for reducing carbon emissions.

As part of the MoU, Ørsted and Enefit intend to establish a joint venture for the development of offshore wind opportunities in the Baltic countries, including the Liivi offshore wind project in the Estonian part of the Gulf of Riga.

Furthermore, Ørsted has submitted an application for an area in Latvian waters next to the Liivi site. Through these sites, the partnership aims to pursue a cross-border hybrid solution, which will connect an offshore wind farm to both Latvia and Estonia and enable the utilisation of the offshore wind transmission cables as an interconnector between the two countries.

"We are very excited about teaming up with Enefit, with the goal of developing offshore wind opportunities in the Baltic countries. With the right regulatory framework in place, offshore wind can deliver large-scale green energy in Estonia and Latvia before 2030. The sheer size of offshore wind farms makes them ideal for cross-border hybrid solutions, and we commend the Estonian and Latvian governments for their leadership in advancing regional corporation on large-scale renewable energy production. The Baltic Sea area is becoming a centre for offshore wind build-out which will contribute significantly to the decarbonisation efforts of both the region and the European economy. The Baltic countries can to a large extend be powered by renewable energy from offshore wind, and we look forward to team up with Enefit to realise this potential."

According to Hando Sutter, Chairman of the Management Board of Enefit, the strategic goal of Enefit is to increase renewable energy production.

"Our renewable energy company, Enefit Green, is already the leader of onshore wind in the region and now also aims to take the lead in offshore wind. We have been preparing an offshore wind farm in the Gulf of Riga for more than 10 years, which has given us a good knowledge of the local offshore wind conditions and makes this collaboration well positioned to deliver on the ambitious 2030 targets for Estonia and the Baltic countries. Together with the world's leading developer of offshore wind farms, Ørsted, we now take an important step towards our vision of delivering offshore wind energy in the Baltic countries before 2030. It is essential that offshore wind will be developed in an environmentally friendly way that involves local communities so that they can benefit from the wind farm. The construction of offshore wind farms, like the Liivi or North Western Estonia (Hiiumaa) project, could create the conditions for the emergence of a new industry with professional competences and highly qualified long-term jobs in the fields of energy, transport, and logistics. During the construction of an offshore wind farm of this size, thousands of jobs will be created, including in Estonia and Latvia," Sutter said.

Offshore wind offers a clear green path forward when Estonia and Latvia desynchronise from the Russian grid, and Estonia looks to phase out shale oil as part of its decarbonisation efforts. Offshore wind is the most viable option for large-scale renewable energy to deliver high security of supply for the two countries.

In addition to the cooperation within Estonian and Latvian governments developing offshore wind, the EU's offshore renewable energy strategy proposes to increase Europe's offshore wind generation capacity from the current 12 GW to at least 60 GW by 2030 and to 300 GW by 2050. The Baltic Sea can make a significant contribution to this target with a potential above 90 GW. In 2020, the EU member states around the Baltic Sea signed the Baltic Sea Offshore Wind Declaration to accelerate the build-out of offshore wind in the Baltic Sea to reach both national and international climate targets.

The Ørsted vision is a world that runs entirely on green energy. Ørsted develops, constructs, and operates offshore and onshore wind farms, solar farms, energy storage facilities, and bioenergy plants, and provides energy products to its customers. Ørsted ranks as the world's most sustainable energy company in Corporate Knights' 2021 index of the Global 100 most sustainable corporations in the world and is recognised on the CDP Climate Change A List as a global leader on climate action. Headquartered in Denmark, Ørsted employs 6,179 people. Ørsted's shares are listed on Nasdaq Copenhagen (Orsted). In 2020, the group's revenue was DKK 52.6 billion (EUR 7.1 billion). Visit orsted.com or follow us on Facebook, LinkedIn, Instagram, and Twitter.

Enefit's ambition is to help customers plan and implement the green transition by offering a convenient and sustainable full range of energy solutions. The company is the leading producer of wind energy in the Baltic states and one of the few liquid fuel producers in Europe. Enefit employs 4,555 people. The Group's revenue in 2020 was 834 million euros.