Ørsted and Bigadan are inaugurating their first jointly-owned biogas plant. The plant will convert residues from Novo Nordisk and Novozymes into bio-natural gas and fertiliser. 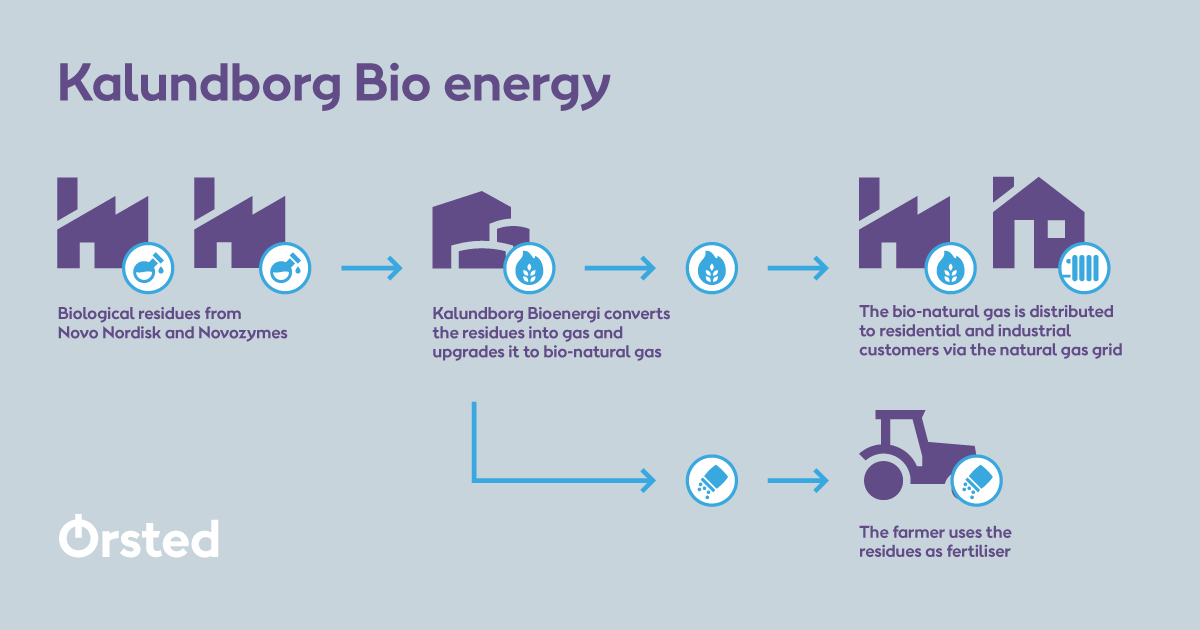 In future, the residues from Novo Nordisk’s and Novozymes’ factories in Kalundborg on the west coast of Zealand will be transformed into bio-natural gas and fertiliser. Ørsted and Bigadan have just finished building the biggest biogas plant in Eastern Denmark, and today the plant is being inaugurated by the Danish Minister for Energy, Utilities and Climate.

“Kalundborg Bioenergy is a fantastic example of how we can exploit the value in residues. Novo Nordisk and Novozymes produce insulin and enzymes in Kalundborg which are sold all over the world, and now the residues from production will be converted into energy and fertiliser at a local plant,” says Thomas Dalsgaard, Executive Vice President and CEO of Bioenergy & Thermal Power, Ørsted.

The new biogas plant in Kalundborg will process approx. 300,000 tonnes of biomass from Novo Nordisk and Novozymes. The plant converts the residues into biogas, which is then upgraded to bio-natural gas. The climate-friendly bio-natural gas can be used as a substitute for fossil natural gas and delivers significant carbon savings.

“If we’re going to have a world that runs entirely on green energy, it’s important to find the right combination of green technologies that can replace fossil fuels. And this is where biogas may also play an important role in future,” says Thomas Dalsgaard.

When the residues have been processed at the biogas plant, they will be used as fertiliser in the fields, just as they already are today – all the nutrients passing through the plant will be recovered for fertiliser use.

Jesper Haugaard, Vice President of Novozymes’ production in Europe and Denmark, is looking forward to being a part of starting up the new biogas plant:

“Sustainability is part of our DNA. Now, we’re starting to use biomass for the large-scale production of biogas as well. It represents a doubling up in the recycling of residues, which benefits the environment, and is a good example of a true circular economy. We’re strengthening the partnership in the Symbiosis, and at the same time, it’s helping us to optimise our production.”

Michael Hallgren, Senior Vice President, Production at Novo Nordisk in Kalundborg and Chair of the Board of Directors of Kalundborg Symbiosis, says that the new biogas plant is one of several initiatives in the partnership:

“For more than 45 years, Kalundborg Symbiosis has existed as a unique partnership that connects industries as well as public and private players with circular production and sustainability as the focal point. Including the biogas plant, we now have 25 different flows in the Symbiosis, and many of them have been around for years. The partnership has high ambitions for the continued development of the circular system – and here the new biogas plant is a really good example. Together, we've created a sustainable solution which at the same time significantly optimises production.”

Together with its partner Bigadan, Ørsted started construction of the biogas plant in spring 2017. Bigadan, which has more than 30 years of experience in the biogas industry, will operate the plant.

“I’m delighted that construction has now finished, and that we’re ready for commercial operation. I'm looking forward to the future cooperation, where we’ll be responsible for running the plant and for selling the bio-fertiliser to farmers on Zealand,” says Karsten Buchhave, CEO of Bigadan A/S.

The biogas plant can produce 8 million cubic metres of bio-natural gas a year. This corresponds to the natural gas consumption of approx. 5,000 households, and represents a carbon saving of approx. 17,000 tonnes of carbon a year.