Historical partnership saves the climate from 200,000 tonnes of CO2

Ten years ago, Novo Nordisk and DONG Energy committed to a bold climate partnership – the very first partnership between a large business enterprise and an energy company. The aim of the partnership was to make businesses commit to energy savings and to invest in renewable energy. For the Danish Minister for Energy, Utilities and Climate, Lars Christian Lilleholt, it helps strengthen energy efficiency and renewable energy as Danish core positions. 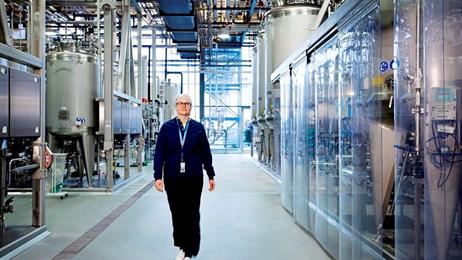 Over the past ten years, Novo Nordisk and DONG Energy have jointly reduced the energy consumption at Novo Nordisk's Danish factories by more than 20 per cent. In 2016, the annual energy savings reached 100 million kilowatt-hours and in ten years, Novo Nordisk has reduced its energy bill by DKK 270 million. The company’s energy efficiency measures have saved the climate from an emission of 200,000 tonnes of CO2. This equates to the annual CO2 emissions of approximately 220,000 Danish households. And finally, as a result of the climate partnership, Novo Nordisk is now able to cover its electricity consumption cost-neutrally by using green power.

The search for energy savings has been key to the partnership. In order to achieve the large reduction in energy consumption, 457 projects have been completed. The largest reductions have been found within ventilation, cooling, reuse of surplus heat and a number of process optimisations.
When signing the agreement in spring 2007, Novo Nordisk committed to buying power from the offshore wind farm Horns Rev 2, which was a contributing factor to DONG Energy making its final investment decision for the offshore wind farm. A decision that accelerated a business adventure which has created growth, technology development and jobs. In fact, DONG Energy installed its offshore wind turbine number 1,000 in 2017.


The new way of working together on energy savings and renewable energy has also been a source of inspiration for other energy companies, business enterprises and politicians – and is considered a relevant showcase of 'the Danish model' which formed the basis of the EU's Energy Efficiency Directive.

The Danish Minister for Energy, Utilities and Climate, Lars Christian Lilleholt comments:
"When Danish companies enter into climate partnerships, it has many good effects. Climate partnerships contribute to strengthening energy efficiency and renewable energy as Danish core positions, they support the Danish objective of fossil fuel independence, and they promote companies' competitiveness, among other things through reduced energy expenses. It's also worth mentioning that climate partnerships can also pave the way for new business models and innovative ways of cooperating on renewable energy efficiency, which is essential if we're to achieve the ambitious objectives within the field of energy. So I definitely think that there's good reason to celebrate this kind of projects."

On the partnership's significance to Novo Nordisk, Henrik Wulff, Executive Vice President, Novo Nordisk, says:
"Our climate partnership with DONG Energy has served as inspiration for our ambition to use electricity exclusively from renewable energy sources at all our global production facilities by 2020 while continuing to focus on energy savings. Together with DONG Energy, we've also taken steps to help selected suppliers reduce their energy consumption."

The partnership has been of great value to DONG Energy, says Morten Buchgreitz, Executive Vice President, says:
"Our climate partnership with Novo Nordisk has been a role model for energy-saving initiatives in the Danish business community. We've entered climate partnerships with companies from a wide range of industries. Large business enterprises, organisations, housing associations and pension funds have been among our partners. Despite the long-standing awareness about energy consumption in Denmark, we've typically succeeded in reducing our partners' energy consumption by 10 to 30 per cent. Our model has therefore attracted international attention, and we're in dialogue with businesses in our other markets about similar cooperation."

The close and long-lasting cooperation has resulted in much more than just energy savings. Among the innovative energy solutions is a new agreement which, from spring 2018, will carry yet another significant contribution to the Danish production of green energy from biogas. A new biogas plant in Kalundborg will convert by-products from Novozymes’ and Novo Nordisk’s factories in Kalundborg to bio natural gas. And in 2008, Novozymes became DONG Energy's second climate partner. Since then, DONG Energy has entered into more than 100 climate partnerships.