Yet another reply to Ole T Krogsgaard

By Martin Barlebo, Head of Communication, DONG Energy
In more than 20 opinion pieces, primarily in the Danish daily Jyllands-Posten, Ole T. Krogsgaard has criticised the capital increase in DONG Energy in 2013/2014 and a number of other matters in DONG Energy. Here, he has quite openly accused DONG Energy's owners, the Board of Directors and the Executive Board of lying and manipulating. Krogsgaard's allegations are unsubstantiated, and they are quite simply wrong. This also applies to the allegations made in his most recent opinion piece on Jyllands-Posten's Finans.dk website.
A need for a capital injection
The author categorically rejects that DONG Energy has experienced a crisis, and that there was a legitimate need for a capital injection. The fact is that DONG Energy sustained significant financial losses in 2012 due to challenges in the gas market. From 2011 to 2012, DONG Energy's operating income (EBITDA) fell by 37%, from DKK 13.8 billion to DKK 8.6 billion. At the same time, the Group's debt grew by 29%, from DKK 34.1 billion to DKK 43.8 billion.
As a result of this development, in October 2012 the credit rating agency S&P downgraded their assessment of the company's credit rating, which is based on the net debt to EBITDA ratio. In November 2012, DONG Energy was also placed on the negative outlook list by the rating agency Fitch. Had the company not taken initiatives to improve its capital structure, the company would have been further downgraded. 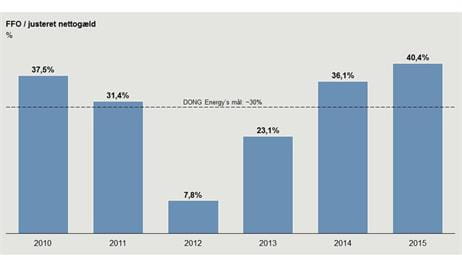 In that case, DONG Energy would have been the only large energy group in Europe without a solid investment grade rating. With DONG Energy's very large investment programmes, this would have been untenable.
Financial action plan in February 2013
That is why the group's credit rating had to be restored. In February 2013, DONG Energy's Group Executive Management announced a financial action plan which included the divestment of non-core assets and ownership interests in core activities, cost reductions, restructuring of the loss-making gas business as well as injection of equity. The shareholders of the company decided that equity should be injected by new shareholders.
A successful implementation of the action plan was a prerequisite for restoring DONG Energy's credit rating and thus the basis for the investments and the development which has increased the value of the company since 2013. Without new equity, DONG Energy would have to stall its investments to redress the balance between cash flows from operations and net debt.
Necessary impairment losses
Ole T. Krogsgaard also incorrectly alleges that DONG Energy has carried out major write offs to help support the crisis story in the media. It is a serious allegation to claim that a company prepares fraudulent financial statements. Because that is in fact what Krogsgaard claims. We have previously stated the facts, but as the author ignores these, I will repeat them here.
In 2012, DONG Energy had to make provisions of DKK 2.9 billion for onerous contracts for gas storage facilities and LNG capacity as well as write off the value of our gas-fired power stations in the Netherlands and the UK. The situation was caused by overcapacity, low coal and CO2 prices and a negative development in the European gas market – factors that also led to write offs in the majority of European energy companies, and which market developments have since shown to be fully required.
In 2013, 2014 and 2015, DONG Energy's oil and gas assets were impaired as a result of significantly falling oil and gas prices in 2014 and 2015, because some oil and gas fields did not contain the expected oil and gas volumes, and because two ongoing extensions were delayed and more expensive than originally assumed.  These factors have reduced the value of the assets, and, as required by the Danish Financial Statements Act, their value must therefore be written off. All other oil and gas companies have for the same reasons also written off the value of their assets.
Unfounded allegations
Ole T. Krogsgaard is a very keen debater, and we have on several occasions replied to his unfounded allegations in debate pieces. It is therefore incorrect when he, in his most recent piece, accuses DONG Energy's CEO of not responding to criticism. Within the past two months, Henrik Poulsen has held two well-attended press conferences, given more than 25 interviews in Danish and international media, and has talked at a public meeting with about 300 participants, organised by the Danish Shareholders Association. At all these occasions, he has answered critical questions. For several years, fact-based answers to Krogsgaard's unfounded allegations have also been available on dongenergy.com. Unfortunately, Krogsgaard continues to ignore the facts of the matter.