Schoolchildren are taught how to safely share the road with large trucks. 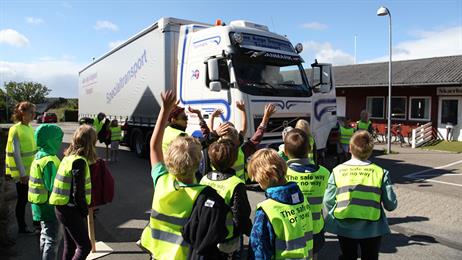 For 250 primary and lower secondary schoolchildren, some of this week’s lessons have moved into the school playground and up into the cabins of a large truck. A road safety course for the many children at Fjordbakkeskolen in Skærbæk has come about as a result of an inspiration workshop between DONG Energy and local partners in Skærbæk.

"Earlier in the year, as part of the conversion of the Skærbæk Power Station to wood chips as of 2017, we invited a number of partners to an inspiration meeting. The aim of the meeting was to come up with ideas on how to strengthen focus on safety."

Among other things, the workshop has resulted in DONG Energy teaming up with local primary school 'Fjordbakkeskolen Skærbæk' and the Danish Transport and Logistics Association, DTL, to launch a road safety campaign organised by 'Børneulykkesfonden' (a Danish child accident prevention foundation). The course aims to teach children how to safely share the road with large trucks, with particular focus on visibility and right turns.

Poul Jakobsen, the local Headmaster of Fjordbakkeskolen in Skærbæk, said:

"We really enjoy being able to cooperate with the community in specific situations. In this case with DONG Energy, where they were able to translate theory into practice for our school children. 'A blind spot' suddenly becomes tangible when the individual child is sitting in a truck. We had a very good day for all children, and we've only received positive comments from staff, children and parents."

Working together to enhance trafic safety

The children learned about the complexity of making a turn when sitting behind the wheel of a real truck and were instructed on how to avoid dangerous situations.

Frank Davidsen from the Danish Transport and Logistics Association said:

"It has a positive effect on traffic safety that we can play a role in a joint effort as in this case. We already have an excellent cooperation in the day-to-day work with the Danish Cyclist Association and other organisations on the interaction between the heavy traffic and the soft road users, which has resulted in better teaching of drivers and targeted campaigns. Events like this are good supplements."