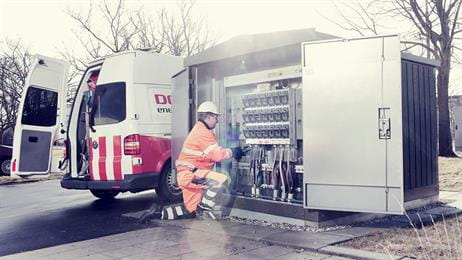 More heat pumps and electric vehicles are on their way, and a host of new units for communication and entertainment will come to define domestic consumption. At the same time, electricity generation will become less predictable and harder to control as the share of renewable energy from wind turbines and solar cell installations increases, progressively replacing supplies from large central power stations.
So maintaining high reliability of supply to consumers in North Zealand and the Copenhagen area will depend on a different kind of grid control and monitoring in the region. DONG Energy aims to tackle this challenge by using a new, state-of-the-art monitoring system and by installing intelligent electricity meters. The new IT monitoring system called DMS (Distribution Management System) has been developed in recent years in a partnership with Schneider Electrics.
Anders Vikkelsø, Vice President at DONG Energy, said: "The future challenges mustn’t mean that we have to compromise on safety with regard to people, plants or the quality of supply to our customers. That’s why we needed to modernise and future-proof the entire backbone of our work with the grid."
The significance of future investments in the grid
Thanks to the new monitoring system, DONG Energy will in future be able to track load on the grid 24/7, and build up detailed knowledge about where and when electricity is consumed. This will also have an impact on the company's future investments.
Vikkelsø explained: "We’ll be able to read the grid like an open book and see precisely where power outages occur, where the grid is subject to high loads, and where power consumption is low. As we progressively build up an historical overview based on all the data, we’ll be able to reduce costs by targeting our investments even more closely. Measurements, data processing and automated installations will come to play a much larger role than today, and will provide us with a more solid basis when making decisions about where to expand the grid, and where it’s safe to postpone investments."
In 2017, DONG Energy will be starting work on replacing more than a million electricity meters, after which consumers will no longer need to perform the annual readings themselves. The new meters will send in readings every hour, allowing the company to build up new knowledge in this area as well. Finally, the new meters will have the capacity to stimulate more flexible energy consumption if consumers choose to let selected units switch on and off in step with the fluctuations in electricity prices. DONG Energy estimates that the programme to replace the meters will conclude in 2020.