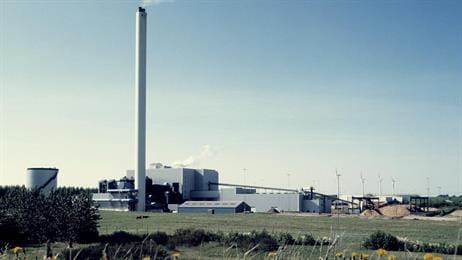 Facts about the Måbjerg CHP Plant:

The Måbjerg CHP Plant burns waste and sewage sludge as well as straw and wood chips and is able to cover the majority of the district heating demand in the Danish cities Holstebro and Struer with a district heating capacity of 68 MJ/s. Furthermore, the CHP plant has an installed capacity of 28MW electricity.
Today, DONG Energy has entered into an agreement to divest the waste-fired CHP plant near Holstebro, Måbjerg CHP Plant, to to the Danish utility companies Struer Forsyning Fjernvarme A/S and Vestforsyning Varme A/S. Consequently, DONG Energy is divesting its last waste-fired CHP plant.
Thomas Dalsgaard, Executive Vice President in DONG Energy Thermal Power, said: "The divestment is part of our strategy to focus on the central power stations in Denmark. With the agreement concerning the Måbjerg CHP Plant, we're divesting our last local CHP plant."
In 2011, DONG Energy decided to focus on its large central power stations and since then, we've divested eight local biomass- and gas-fired power stations as well as six waste-fired CHP plants.
Dalsgaard continued: "We’re in the process of converting a number of our central power stations to using wood pellets and wood chips as fuel instead of coal and gas so that they contribute to Denmark's green conversion. This is our core competence and what we should concentrate our efforts on. Our target is that at least half of the electricity and heat generated at our power stations must originate from biomass in 2020."
Still part of biorefinery
The divestment of Måbjerg CHP Plant to Struer Forsyning and Vestforsyning does not change the plans for the biorefinery Maabjerg Energy Concept where the CHP plant will use the biofuel 'lignin' from the biorefinery.
Dalgsgaard concluded: "The Måbjerg CHP Plant is an important factor in the plans for the biorefinery Maabjerg Energy Concept and therefore, it’s very positive in relation to the realisation of the project that the new owners of the CHP plant will be the local utility companies in Struer and Holstebro."
The realisation of the Maabjerg Energy Concept depends on whether the Danish government introduces a requirement stipulating that at least 2.5 per cent second generation bioethanol should be added to the petrol in order to create a market for the sale.
The agreement concerning the divestment of the Måbjerg CHP Plant, which has been signed today, is expected to be implemented during the first half of 2015 and is, among other things, subject to approval by the Danish competition authorities.