The Westermost Rough offshore wind farm marks the first time that the next generation Siemens 6MW turbine will be used on a commercial scale. 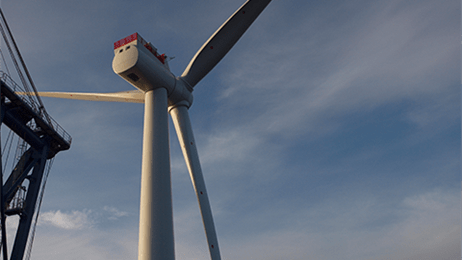 The first of 35 Siemens 6MW turbines has been successfully erected at the Westermost Rough offshore wind farm, a joint venture between DONG Energy (50%) and its partners Marubeni Corporation (25%) and the UK Green Investment Bank (25%).

The Westermost Rough offshore wind farm marks the first time that the next generation Siemens 6MW turbine will be used on a commercial scale – an important step on DONG Energy’s cost of energy reduction strategy. The wind farm will have a capacity of 210MW, producing enough electricity to power approximately 210,000 homes. Duncan Clark, Westermost Rough Programme Director at DONG Energy said;
“This is a major landmark in the construction phase of this project and its achievement is a great credit to the DONG Energy team and our supply chain partners.

"This is the first time we have installed the Siemens 6MW turbine with a 154m diameter rotor on a commercial scale following smaller demonstration projects, and it represents a step change in our ability to provide more energy output from fewer turbines."

Michael Hannibal, CEO Offshore of Siemens Wind Power said: "Only a few days after our D6 wind turbine obtained its final certification it is in place for commercial operation. We are very proud to achieve this milestone on the way to enhancing efficiency and lowering the cost of offshore wind energy with our innovative direct drive technology."

It is expected that the turbine installation on Westermost Rough will be completed in first half 2015. Offshore work is being carried out by one of the world’s most advanced installation vessels, the SEA CHALLENGER, owned by A2SEA.

Situated approximately 8km off the Holderness coast, the Westermost Rough site is one of two offshore wind farms that DONG Energy is currently constructing in the UK along with West of Duddon Sands on the west coast. The wind farms, which will be operational in 2015 and 2014 respectively, represent more than 500MW of green electricity which will be added to the UK Grid.

Construction is being managed from DONG Energy’s office in the Fish Dock, Grimsby on Britain's east coast, by a team of around 50 people. Work is also currently underway onshore at the Royal Dock in Grimsby to construct the permanent home for the Operations and Maintenance team who will service the wind farm over its 25 year lifetime.