The installation of the 77 monopile foundations and transition pieces were successfully finished Tuesday, 29, July 2014. Well-defined working processes in addition to skilled operations ensured a very fast installation process for the foundations. 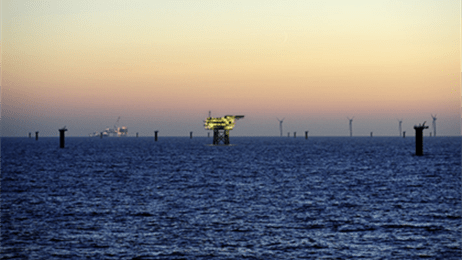 A view of Borkum Riffgrund 1 with its substation and foundations in place.

Borkum Riffgrund 1 Offshore Wind Farm will consist of 78 wind turbines with a total capacity of 312MW and it is located in the German North Sea, 37 km north of the island Borkum. 77 foundations are monopiles with transition pieces, the 78th foundation will be a suction bucket jacket that will be installed for the first time on an offshore wind farm.
Borkum Riffgrund 1 is owned by DONG Energy, Kirkbi A/S and William Demant Invest A/S.
Borkum Riffgrund 1 website
The offshore wind farm Borkum Riffgrund 1 is located around 37km north of the isle of Borkum.
Lys Rhilinger, Offshore Installation Manager of the foundations, at DONG Energy, said: ”I’m very happy that we have successfully completed the installation work. The cooperation within the team was very good and has become more and more routine in the course of time. Together with the nice weather which we’ve had during the last weeks, we now had a turnaround* of the Pacific Orca loaded with four foundations in less than four days. This is almost half of what we had hoped for during the planning.”
(*A turnaround is the cycle from loading in Eemshaven, sailing to the construction site, installation of the four foundation and going back to Eemshaven.)

Storage of the more than 600 tones heavy steel foundations for the offshore wind farm.

All in all 77 of these monopile constructions were anchored to the seabed. At the same time, the connecting pieces, the so-called transition pieces, were also installed. The 78th foundation will be a suction bucket jacket. It is a prototype with a three-legged steel construction with bucket foundations which will use a vacuum-assisted installation method and will be installed for the first time in an offshore wind farm. 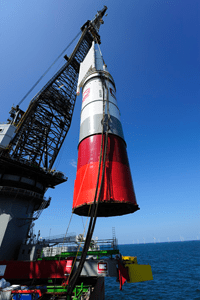 Preparing for the installation: A noise mitigation tool is being used. This silencer guarantees that all noise levels stipulated by the authorities are met. Søren Sørensen, the Foundation Project Manager responsible for the installation of monopiles and transition pieces, said: "We’ve made the right decision to use this optimised installation method in relation to mitigation of underwater noise during piling. It has never been used in this way before and we’ve received excellent results.” 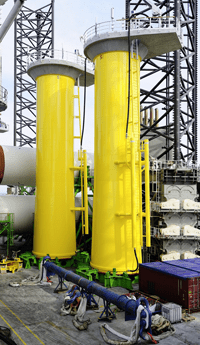 When fully operational in 2015, Borkum Riffgrund 1 will be able to supply green power corresponding to the annual consumption of approximately 320,000 German households.