Ten years ago, Ørsted led industry efforts to significantly bring down the cost of bottom-fixed offshore wind energy, making it a competitive renewable energy solution at scale – one that can contribute to limiting climate change. Now, floating offshore wind needs to see similar, but accelerated, maturation and cost-reducing efforts. Unlocking the innovation, skills, and supply chain investment needed to lower costs will take collaborative efforts across developers and their supply chains. It will also require an enabling policy framework together with support from civil society and local communities. At Ørsted, we’re fully committed to floating wind as part of our quest to create a world that runs entirely on green energy.

Energy production and use make up almost three quarters of global greenhouse gas emissions. This makes transitioning the global energy supply away from coal, oil, and gas to solar energy and onshore and offshore wind a key priority in the fight against climate change. And there’s no time to waste: To limit global warming to 1.5 °C, global emissions must be halved by 2030 – and net-zero emissions must be achieved by mid-century.

The technical potential of floating offshore wind, if realised, means that by the mid-2030s, it could form a major part of the global renewable energy mix. The bottom-fixed build-out will be continuing at pace, but roughly one in five of all new wind turbines entering the water annually by that point could be standing on floating foundations.

Coastlines with technical potential for floating and bottom-fixed offshore wind 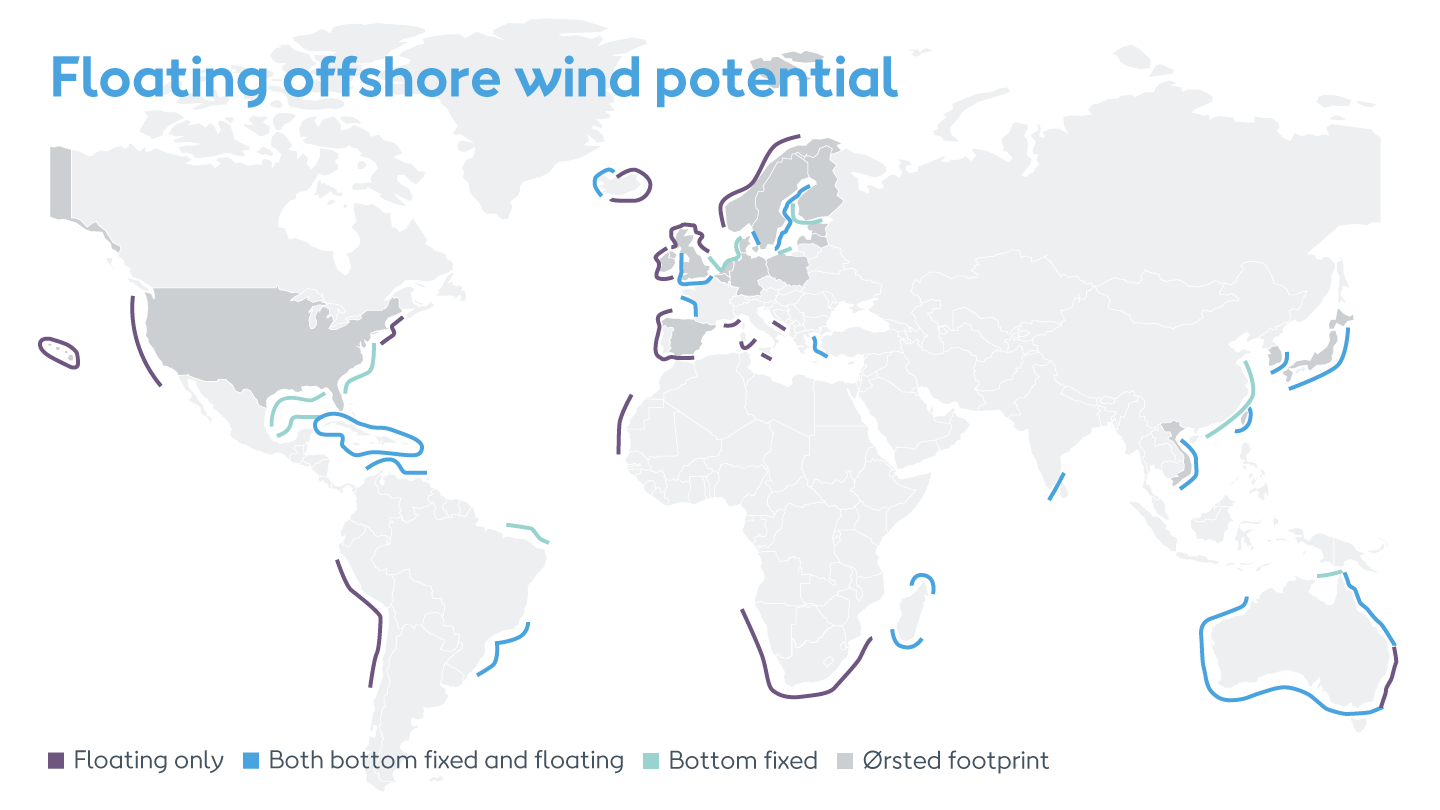 Floating offshore wind is a quickly maturing technology. Only a few years have passed since the first pilot projects were launched, and today, more than 50 small scale projects exist globally. But significant effort will be required to drive the technology towards its full potential by the 2030s so that it can help meet the growing demand for green energy.

For floating offshore wind to mature and deliver power at utility scale, technical challenges will need to be addressed, including research and development in floater design, mooring, and electrical systems with dynamic cables suspended under water.

Innovative technology companies have already made significant progress. However, it will be through partnerships with major developers that technical gaps can be fully closed and the solutions commoditised through partnerships with major developers  – partnerships in which we at Ørsted will leverage our unparalleled experience in engineering and in integrating offshore wind technologies, as well as our experience in meeting the significant challenges of operating offshore wind farms.


Modern offshore wind turbines are huge structures, upwards of 250 metres in height, with blades longer than football pitches and with each wind turbine weighing more than a thousand tonnes. Supporting these giants, while maintaining stability in high waves and winds, is no simple task. It can be done, however, by combining the buoyancy of large and rigid floaters with the stability of strong anchoring to multiple points on the ocean floor.

Today, several floater designs exist, with different qualities that make them suited for different project-specific requirements. For instance, floaters with lower drag profiles are less dependent on deep-sea ports for assembly and launch; and tension-leg platforms have a smaller mooring footprint than other types. 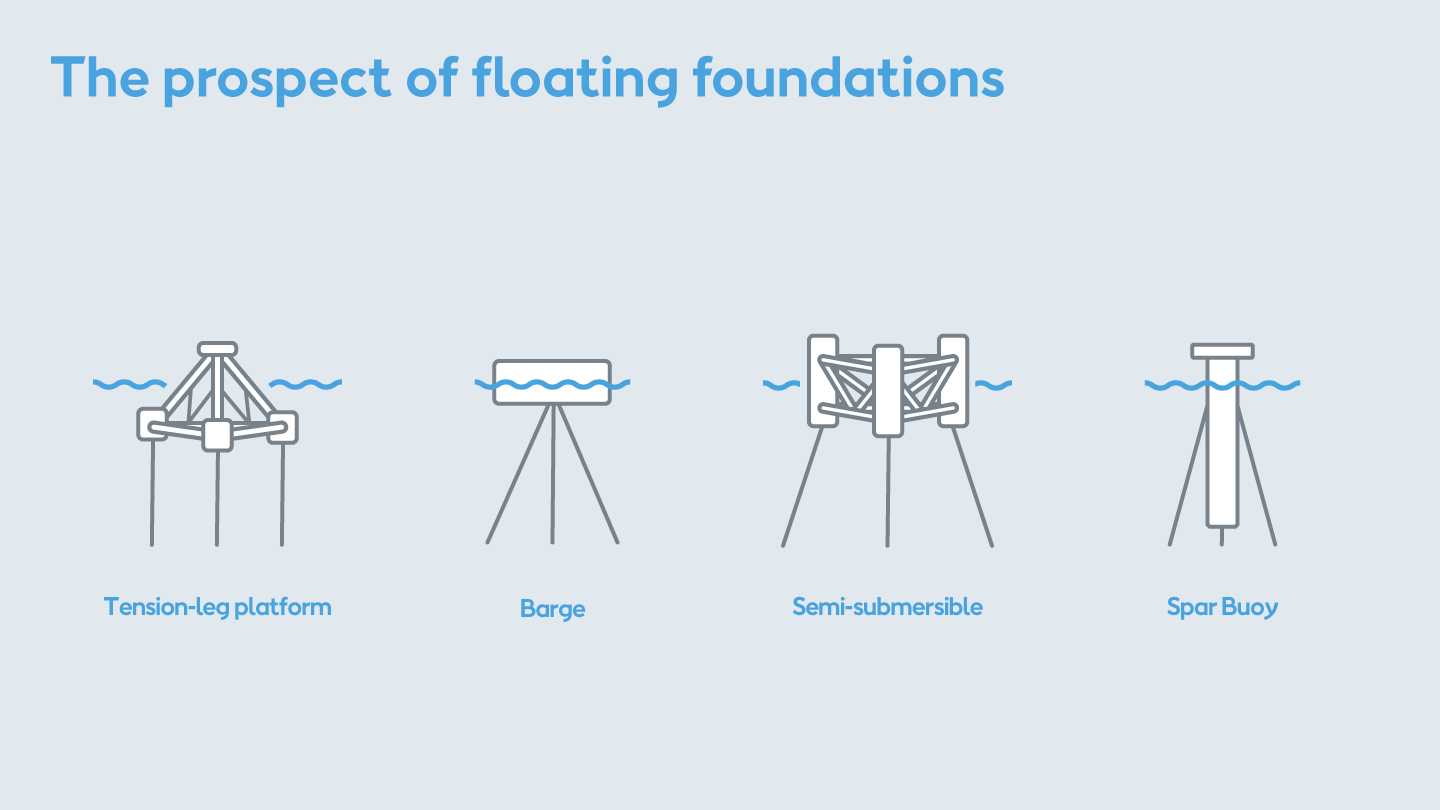 A common feature for all floater designs is mobility. Floaters and wind turbines can generally be assembled at the port site and then towed into position where they’re connected to shore via submerged array cables and via substations which can also be placed on floating foundations. This can help reduce installation time and removes the need for specialist jack-up vessels.


Floating wind from construction to operation 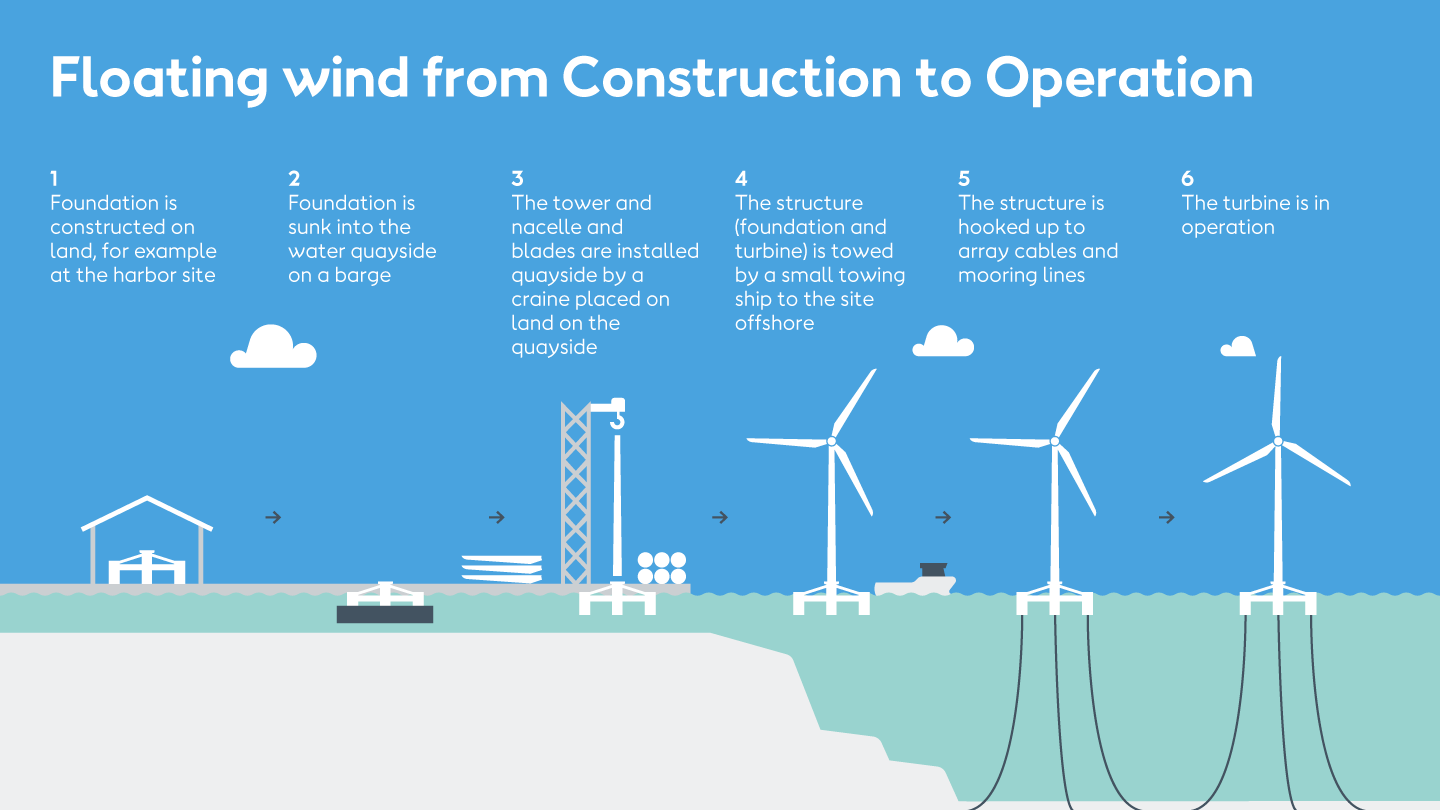 We consider floating offshore wind to be a vital new addition to our renewable energy portfolio, bringing us one step closer to our vision of creating a world that runs entirely on green energy. With a proven track record of more than 30 years in offshore wind, Ørsted has always been an industry leader and catalyst for innovation in this field. We’ll work with industry partners to drive down costs of floating wind and realise the commercial potential of this technology, bringing both our aptitude for innovation and our executional excellence to these efforts.