Tackling the defining issue of our time and limiting global warming to 1.5°C requires us to halve global carbon emissions by 2030. To achieve our goal, we must rapidly phase out coal and other fossil fuels, and build out green power capacity, transitioning to a green energy system supported by increased energy efficiency and electrification.

We already have the green energy technologies available to make the transition to a low-carbon, reliable and safe energy system. However, some technology components still need to reach full commercial maturity.

Applying the power of scale to these technologies, we can make the required step change in the global energy supply while creating a greener, healthier, and more prosperous world. In the following sections, we address some key questions about the role of green power in our energy system.

What are the technologies in the future green energy system? 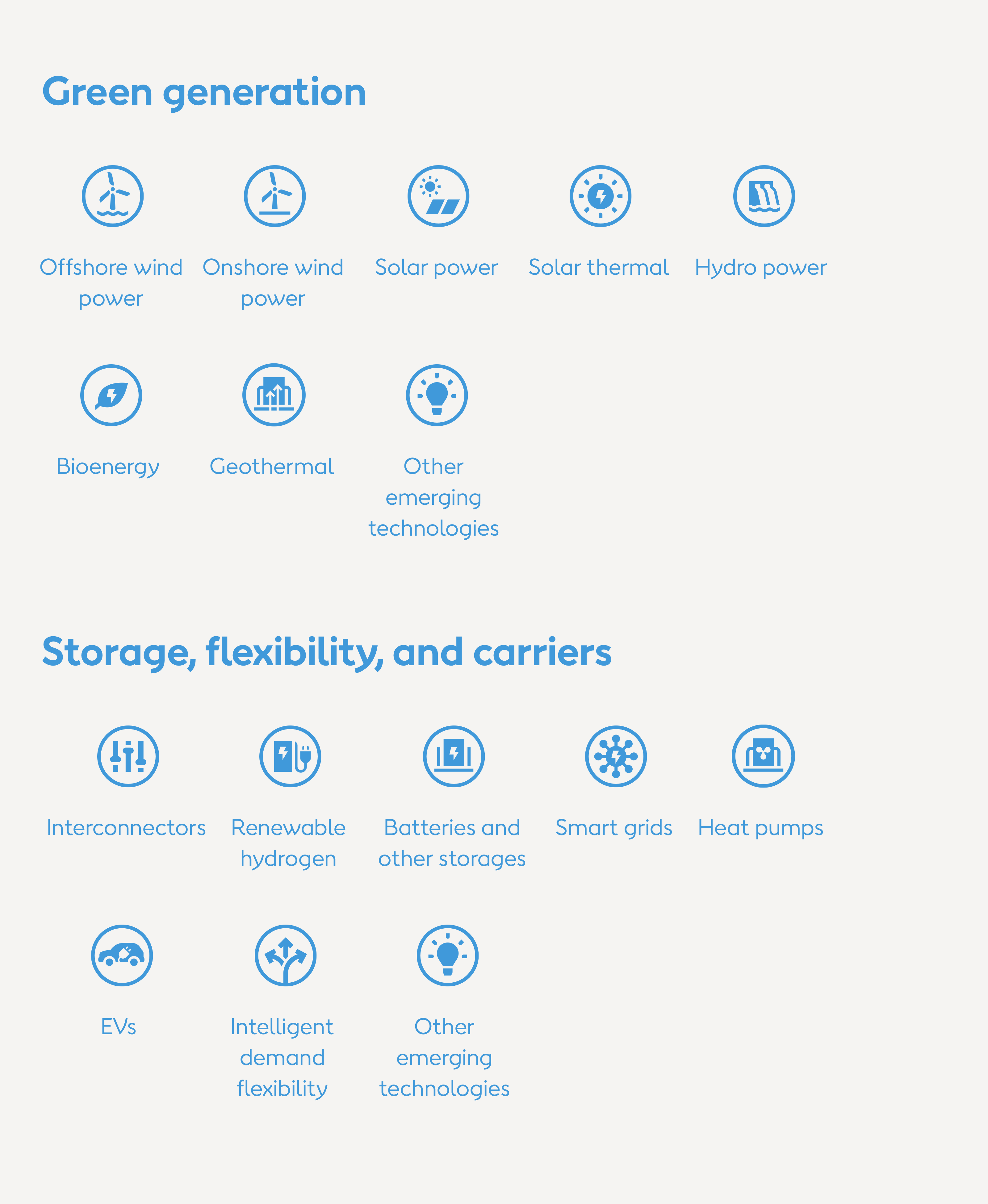 Is green power too expensive?

The cost of building solar power, onshore wind, and offshore wind has declined rapidly in recent years. Green power from solar and wind energy is now cheaper than power from fossil fuels in most parts of the world. The energy technologies which will form the backbone of a future green power system are therefore already available to be deployed at scale.

This cost reduction is a key reason why electricity is projected to emerge as the main carrier of energy globally. Green power is outcompeting newly built fossil-based power in Northwestern Europe and is now also cheaper than coal-fired power plants in the USA.

Solar and wind power is expected to become even cheaper, while the price of power from fossil fuels is expected to increase in many regions due to carbon taxes that put a price on the externalities of the environmental and health-related impacts caused by burning fossil fuels. With that in mind, it not only makes sense to install green instead of black power capacity from a climate and public health perspective, but also from a financial perspective. 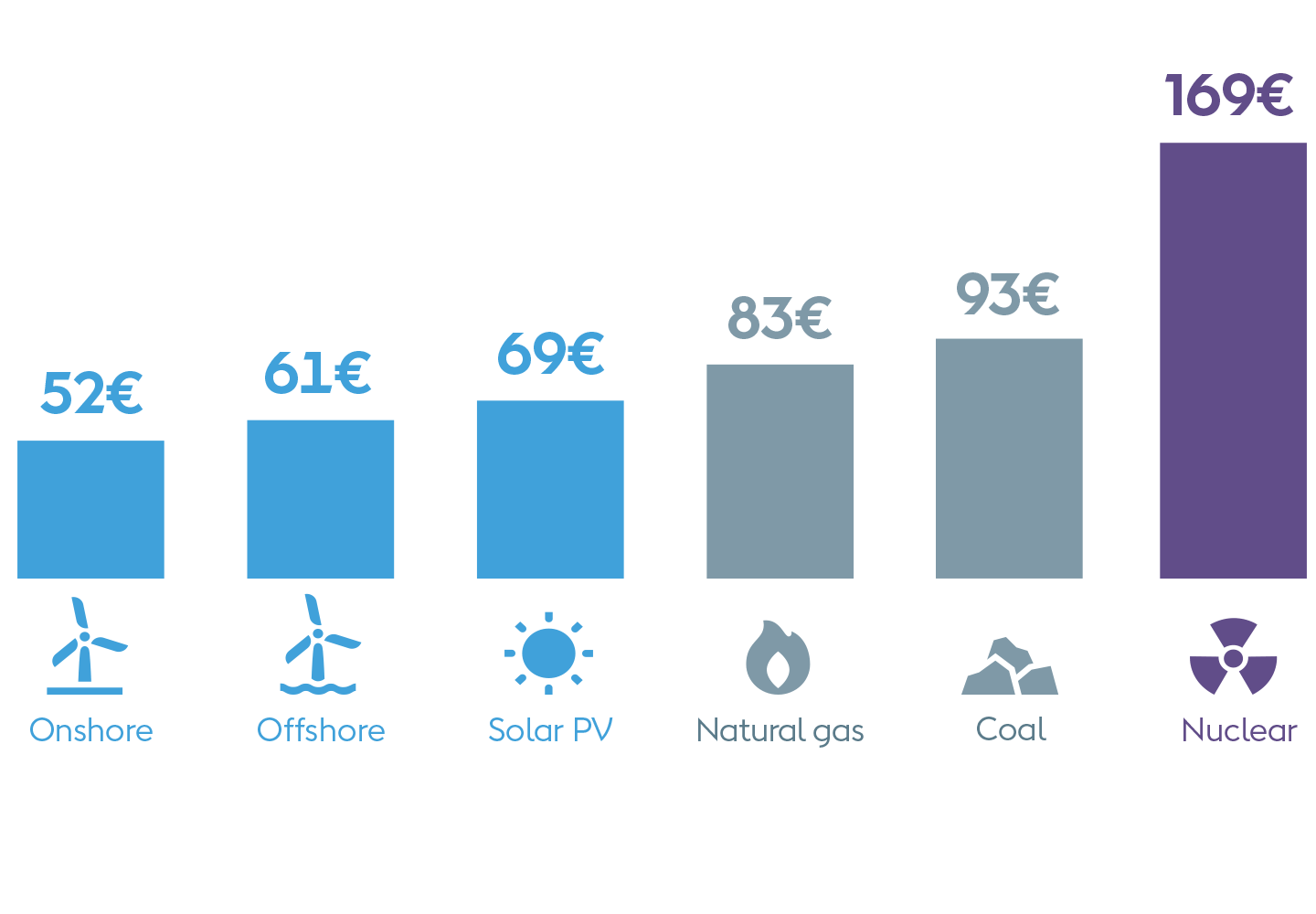 How can economies of scale reduce costs?

Limiting global warming to 1.5°C through electrification of the global energy system using green power requires rapid global deployment of green energy technologies at scale. Scaling up both onshore wind, offshore wind, and solar power so that they become the backbone of a green power system instead of coal will lead to further cost reductions. It will also be important to leverage scale when it comes to green technologies such as hydrogen or batteries that are needed to manage the variable nature of solar and wind energy, but these technologies have yet to become cost competitive.

Governments in Northwestern Europe have ensured demand and volume through long-term green energy build-out targets and dedicated support schemes. This has created a long-term market outlook with increasing volumes, enabling industry to commit to developing offshore wind farms at unprecedented dimensions, reaping the economies of scale. This has unlocked technological innovation and supply chain build-out to further mature the technology.

As a result, the cost of offshore wind energy has fallen by 63% since 2012, making offshore wind power cheaper to install than coal-fired or gas-fired power plants in Europe. This competitive price is now allowing governments to set even more ambitious targets, creating a virtuous cycle of further cost reductions.

How do we ensure a reliable energy system with variable green power?

Power systems across the world are currently transitioning from being dominated by baseload fossil fuel power generation to increasing levels of variable green power from wind and solar energy. So far, the integration has generally been successful, but a common concern is whether a power system based on fluctuating solar and wind power can provide a stable supply of power throughout the day and year.

There is a large potential to establish more wind and solar power
Most countries around the world still have the potential to materially increase the share of green energy, such as wind and solar power, in their power systems before variability becomes a challenge. As an example, the USA gets only 8% of its electricity from solar and wind energy, and many countries have even lower levels of variable green power. 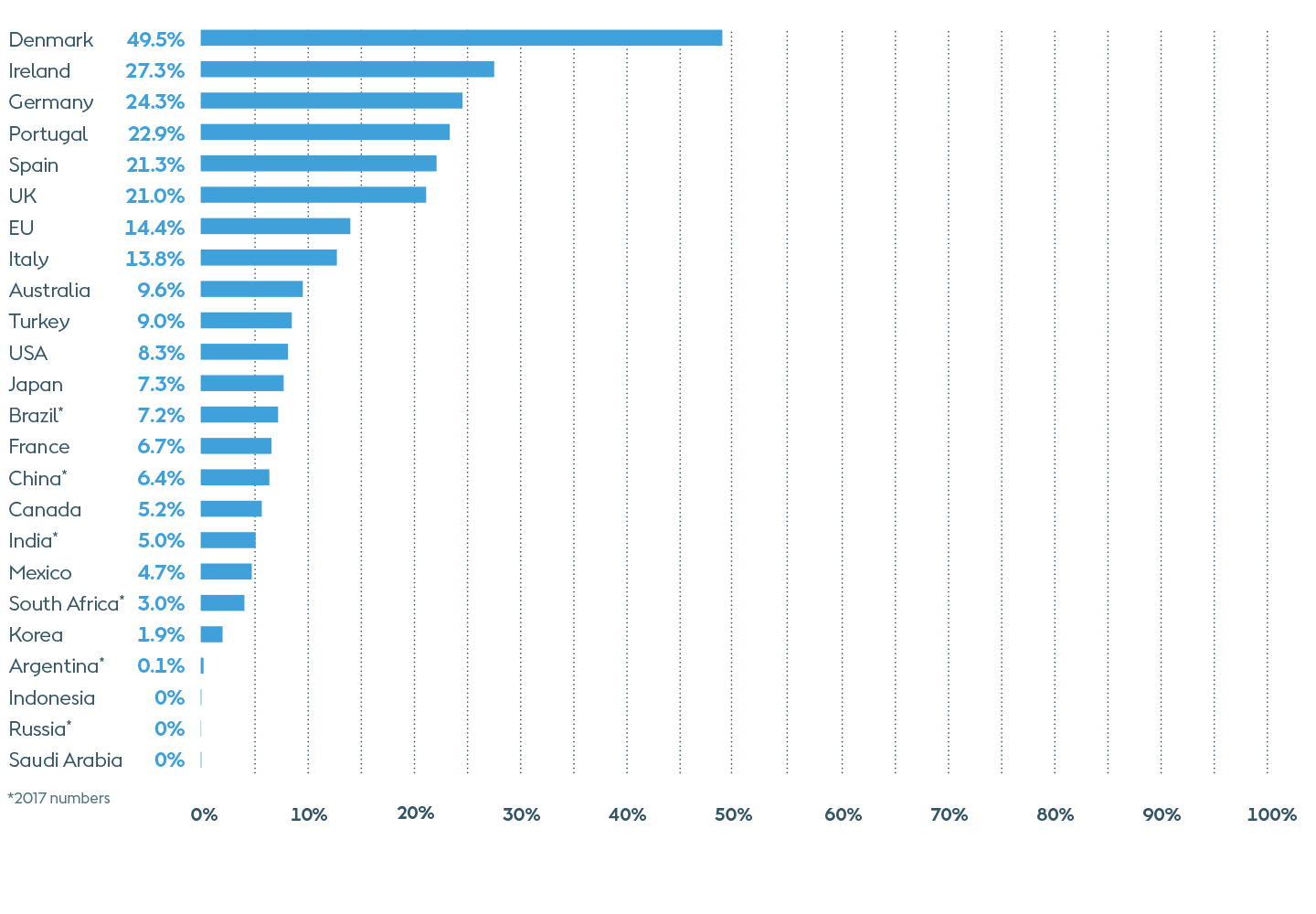 Whilst being perceived as variable, wind energy is in fact relatively consistent, particularly offshore wind power, where the newest farms have capacity factors above 50%. IEA now concludes that offshore wind power’s high capacity factors and lower variability make it comparable to baseload technologies, placing it in a category of its own – a 'variable baseload technologyCitation IEA (2019) Offshore Wind Outlook 2019.. Additionally, wind and solar energy complement each other well, as wind speeds are generally higher at night and in the winter when there are fewer hours of sunlight.

Mature and commercially viable solutions already exist to manage fluctuations from wind and solar energy
When the levels of solar and wind energy in the electricity mix become so high that their variable nature poses a challenge, a number of cost-effective solutions can be deployed to support the security of supply. Denmark, for example, has pushed its share of variable green power – from notably wind power – up to almost half of the country’s power production; a share that is only increasing.

One tool to achive flexibility is increased interconnection between neighbouring countries

To accommodate a higher share of variable green power, Denmark has significantly increased flexibility within the power system. One tool to achieve this flexibility is increased interconnection between countries. The interconnector being established between Denmark and the United Kingdom is a good example of how to balance out varying wind conditions between the two countries. The interconnection between the wind-dominated Danish grid and the hydro-dominated Norwegian grid also leads to better utilisation of both renewable resources. A key enabling factor in this regard is a well-functioning European Internal Energy Market, which facilitates barrier-free trade of electricity across Europe’s borders. Additionally, Denmark has benefitted from increasingly flexible power stations when integrating variable power.

Other mature and cost competitive solutions that can support the balancing of energy systems with increasing levels of variable green electricity, include:

Solutions can help further increase the variable share of green power
There is a need for other solutions to take the share of variable green power even further than that of e.g. Denmark and take the next step in transitioning to a green energy system. Many of these technologies are known but are not yet cost-effective or available at commercial scale, limiting their current impact.

Examples of technologies that are yet to become fully commercialised include:

Experience shows that such green technologies can rapidly become more cost competitive when they are deployed at scale.

With electrification of other sectors, the traditional outlets for power use will increasingly be supplemented by outlets that will likely be much more flexible, such as EVs, heat pumps, electrified industrial processes and production of renewable hydrogen. This means that the future system will have much more flexibility on the demand side, making it easier to integrate more variable green power. There are many obstacles that have to be overcome and new solutions that need to be developed and matured, but there is reason to be optimistic about solving the complex challenges that a global system dominated by variable power poses.