Ørsted and Copenhagen Infrastructure Partners (CIP) have entered into a partnership to develop approx. 5.2 gigawatts of offshore wind in Denmark across four projects. The partnership can accelerate the green transformation greatly, create value in the offshore wind industry, strengthen value- and job creation, and create a Danish business and export stronghold within Power-to-X. 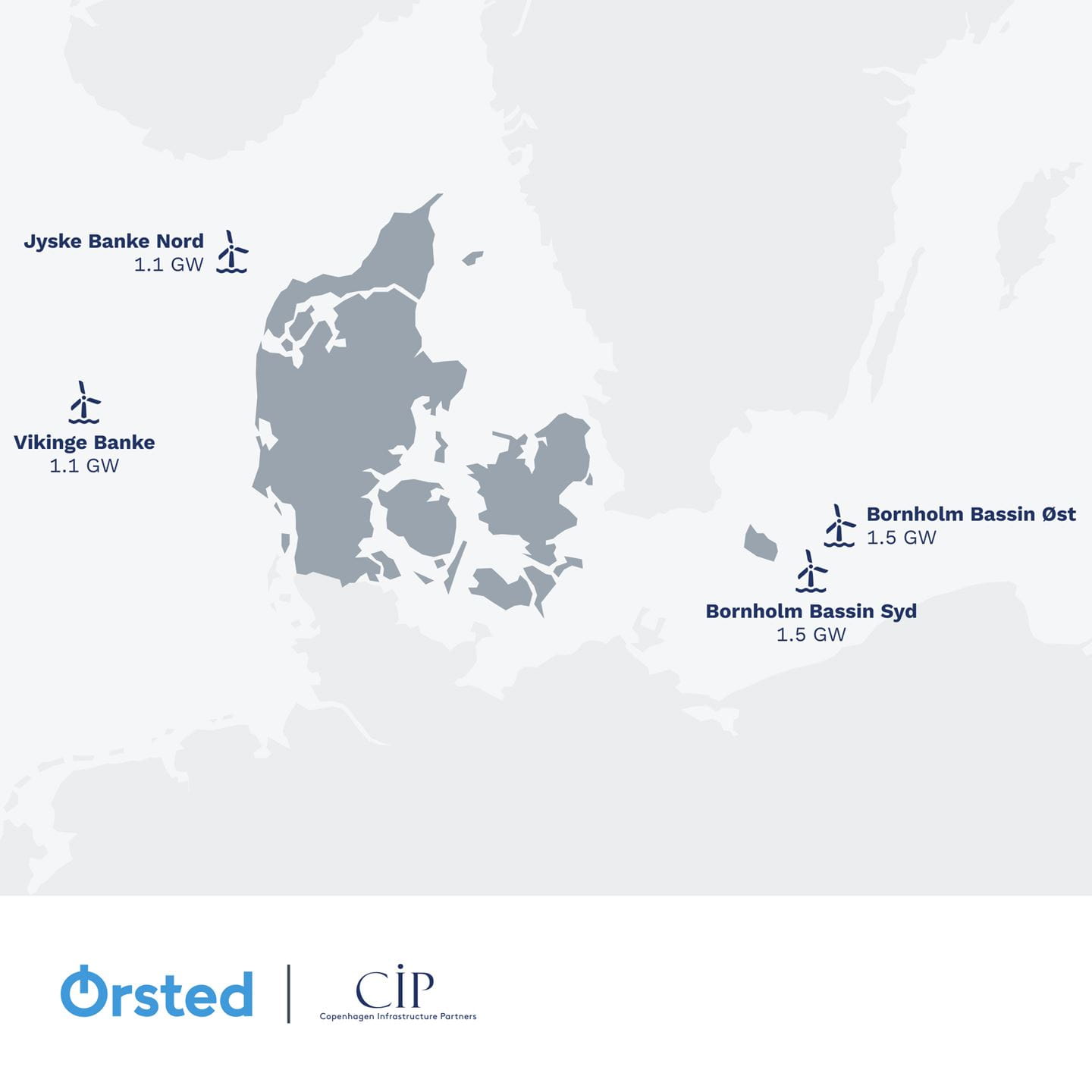 Ørsted and CIP have decided to join forces in a new 50/50 partnership to develop a number of offshore wind projects under the open-door scheme in Denmark. The projects are ‘Vikinge Banke’ (1.1 GW) and ‘Jyske Banke Nord’ (1.1 GW) in the North Sea, and ‘Bornholm Bassin Syd’ (1.5 GW) and ‘Bornholm Basin Øst’ (1.5 GW) in the Baltic Sea. Together, the projects correspond to more than double Denmark’s current installed offshore wind capacity, and they represent a key contribution to the green transformation of Denmark and Europe. The offshore wind farms will be established without support from Danish taxpayers and they will contribute significantly to growth and job creation in Denmark.

The partnership between Ørsted and CIP encompasses the development, construction, and operation of the offshore wind farms as well as the related transmission assets. The partnership envisages that the open-door projects can create a Danish Power-to-X stronghold by delivering large-scale renewable electricity as soon as possible and with a target of 2027/2028 if feasible.

"Denmark has been a pioneer in offshore wind and is a front-runner in the green transformation. The four major open-door projects can help consolidate Denmark's continued leadership position and create the foundation to kick-start the next phase of a Danish business adventure around the production of renewable hydrogen and green fuels. I’m very excited about the partnership with CIP where we combine our unique skills and knowledge to develop a substantial part of Denmark's offshore wind resources.”

“It’s an obvious and good idea for the most experienced Danish offshore wind developers to join forces to ensure that Denmark's largest build-out of offshore wind takes place as efficiently as possible and with due respect for the environment and biodiversity in Danish waters. We’re proud to present our proposal together with Ørsted for how we can ensure the green energy for Denmark, which has never been more necessary, than during these times. If we succeed in completing the projects, we’ll also ensure the renewable electricity needed to give the Danish Power-to-X industry a much-needed boost, and we’re pleased with the support from the Danish pension funds and their members, who prioritise and invest in the green transition."

Globally, more renewable energy is urgently needed to ensure regional energy independence and fight the climate crisis. Denmark has some of the world's best offshore wind resources and is consequently able to supply large volumes of renewable electricity for the continued decarbonisation of Denmark and Europe. Ambitious political plans have already been made to harvest Denmark's offshore wind resources, which Ørsted and CIP fully support. Ørsted and CIP also believe that the partnership's large-scale offshore wind projects can, in parallel with the government tenders, contribute to further pace, value creation and innovation of Denmark's green transition in several areas, with some key dimensions being:

The partnership is subject to merger clearance, which is expected before the end of 2022.

About Ørsted
The Ørsted vision is a world that runs entirely on green energy. Ørsted develops, constructs, and operates offshore and onshore wind farms, solar farms, energy storage facilities, renewable hydrogen and green fuels facilities, and bioenergy plants. Moreover, Ørsted provides energy products to its customers. Ørsted is the only energy company in the world with a science-based net-zero emissions target as validated by the Science Based Targets initiative (SBTi), and Ørsted aims to deliver a net-positive biodiversity impact from all new renewable energy projects it commissions from 2030 at the latest. Ørsted ranks as the world’s most sustainable energy company in Corporate Knights' 2022 index of the Global 100 most sustainable corporations in the world and is recognised on the CDP Climate Change A List as a global leader on climate action. Headquartered in Denmark, Ørsted employs 7,292 people. Ørsted's shares are listed on Nasdaq Copenhagen (Orsted). In 2021, the group's revenue was DKK 77.7 billion (EUR 10.4 billion). Visit orsted.com or follow us on Facebook, LinkedIn, Instagram, and Twitter.

About Copenhagen Infrastructure Partners
Founded in 2012, CIP today is the world’s largest dedicated fund manager within greenfield renewable energy investments and a global leader in offshore wind. The funds managed by CIP focus on investments in offshore- and onshore wind, solar PV, biomass and energy-from-waste, transmission and distribution, reserve capacity and storage, Power-to-X and advanced bioenergy.

CIP manages ten funds and has to date raised approximately EUR 19 billion for investments in energy and associated infrastructure from more than 135 international institutional investors. CIP will accelerate its role in the global energy transition and aims to have EUR 100 billion under management in green energy investments by 2030. CIP has approximately 350 employees and offices in Copenhagen, London, Hamburg, Utrecht, New York, Tokyo, Singapore, Seoul, and Melbourne. For more information, visit www.cip.dk