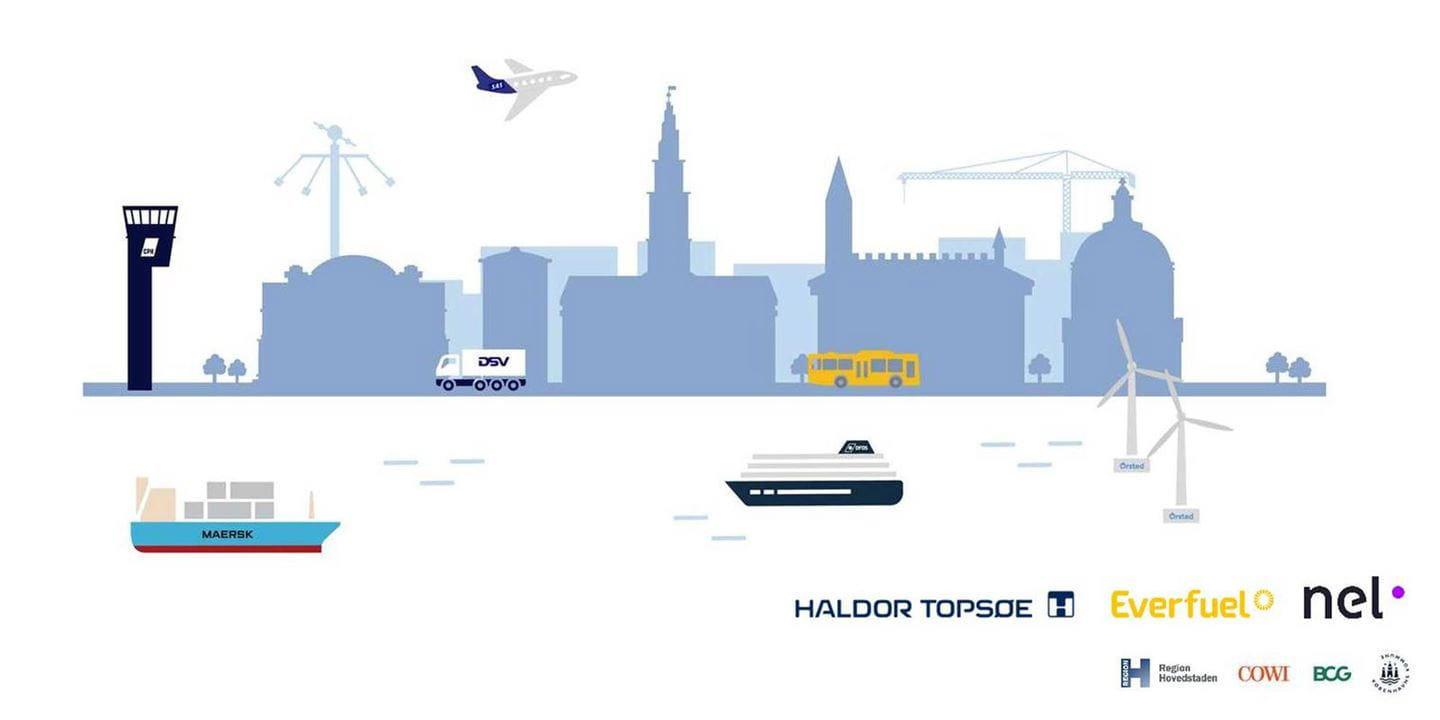 As a result of the increased Danish ambitions within Power-to-X, the partnership behind the Power-to-X flagship project 'Green Fuels for Denmark' in Copenhagen has decided to bring forward parts of the project in order to produce green fuels for heavy transport two years earlier than previously planned. Specifically, the partnership has decided to bring forward 100 MW of the originally planned second phase’s 250 MW electrolysis from 2027 to 2025, as well as to begin capturing sustainable carbon dioxide in 2025.

‘Green Fuels for Denmark’ can potentially supply green fuels corresponding to Denmark's total domestic consumption of jet fuel by 2027 when the full second phase is commissioned, thus fulfilling the government's ambition of 100 % green domestic aviation by 2030, three years ahead of schedule.

The accelerated phase of 100 MW can produce more than 50,000 tonnes of sustainable fuels in 2025, mainly e-methanol for shipping, but prompted by the Danish Government's ambition to establish green aviation opportunities in Denmark as early as 2025, the partnership will examine whether parts of ‘Green Fuels for Denmark’s’ expected production of green aviation fuels can also be brought forward to 2025.

However, the fulfilment of the Danish 2025 ambition, as well as the 2030 ambition requires the establishment of a regulatory framework that makes green jet fuel a real and competitive alternative to fossil fuels. Chemically, there are several ways to produce aviation fuels from hydrogen and sustainable carbon dioxide, and the partnership will explore the various technological possibilities.

"Denmark has a unique opportunity to create an industrial success story within green fuels for heavy transport. The Danish Parliament and Government have created a very good framework to realise this huge potential through their ambitious goals for the build-out of offshore wind and the construction of Power-to-X facilities. The Danish Prime Minister's recent announcement of the ambition to accelerate the green transformation of aviation has directly made us in the partnership look for a way to enable the production of green jet fuel as early as 2025. It will be a technological challenge that we in Green Fuels for Denmark are ready to answer, so that we can secure Denmark's position as a green leader in the coming decades and push for a green breakthrough for the global transformation of the aviation industry. "

"It’s positive that the Danish Government has set ambitious targets for the green transformation of domestic aviation. Consequently, we in Green Fuels for Denmark are actively looking at whether we can contribute to achieving these ambitions with Power-to-X produced in Denmark. If we are to realise the ambitious targets, it’s necessary that there’s a political will to secure financial support to produce sustainable aviation fuels, especially the first production, so that we can get started without the fuel becoming too expensive. If successful, the Government's objectives could be an important starting point that allows Denmark to take the lead – not only in relation to the climate agenda – but also in a potential industrial success story. We are both at Copenhagen Airports and in Green Fuels for Denmark ready to play and active role."

"The Danish Government's goal is very exciting and we look forward to working with the Government and our partners to solve the challenge. However, the fulfilment of the 2025 ambition, as well as the 2030 ambition, will require that far more sustainable fuel is produced than at present, and that framework conditions are established, making green jet fuel a real and competitive alternative to fossil fuels. Denmark is in a good position to start production and the partnership's acceleration of the production is a step in the right direction. We look forward to further dialogue with the Government about structuring a future green and competitive domestic air service."

“The science is clear and so are our customers in their ask for sustainable solutions across air, land, and sea. Maersk has set an ambitious milestone target to source sustainable aviation fuel for 30 pct. of our air cargo by the end of the decade. For us to deliver on this huge challenge, action is needed now. Green Fuels for Denmark could firmly place Denmark on the world map as a Power-to-X frontrunner – and an acceleration of the plans can help us benchmark and scale our sustainability efforts to meet the needs of the global air cargo operation we are currently building as part of our end-to-end logistics offering.”

In the initial vision for ‘Green Fuels for Denmark’, the plan was to commission an electrolysis plant with a capacity of approx. 10 MW in 2023 and subsequently 250 MW in 2027 and 1,300 MW by 2030. It’s still the partnership’s plan to expand the full second phase of Green Fuels for Denmark to 250 MW by 2027. This phase will be able to supply enough jet fuel to cover significantly more than the expected Danish domestic consumption of jet fuel and thus also contribute to the conversion of international aviation from Denmark, provided that the necessary framework is established. At the same time, the realisation of the full second phase depends on the availability of sufficient amounts of new green power, e.g. from offshore wind.

Green Fuels for Denmark's final phase of 1,300 MW will be able to supply green fuels, primarily jet fuel, that can replace approx. 30 % of the total fuel consumption at Copenhagen Airport, which will entail a significant green conversion of international air traffic in addition to domestic air travel.

Currently, there’s no significant consumption of sustainable aviation fuel produced through Power-to-X, either in Denmark or internationally. Therefore, Denmark has a unique opportunity to create an international leadership position, but the technology for producing the fuels still needs to be matured significantly, just as new aviation fuels must go through a thorough and extensive approval process before they can be used in aviation.

About the Green Fuels for Denmark project
Green Fuels for Denmark is Denmark's most ambitious vision for large-scale production of sustainable fuels for the transport sectors with a CO2  reduction potential of 850,000 tonnes by 2030. The project is led by a partnership consisting of Ørsted, SAS, Copenhagen Airports, A.P. Moller – Maersk, DFDS and DSV

Nel, Haldor Topsøe and Everfuel are partners in the first phase of the Green Fuels for Denmark project and in the development of the second phase. COWI is also a knowledge partner on the project. The project is supported by Molslinjen, the City of Copenhagen and the Capital Region of Denmark.

Green Fuels for Denmark has also been selected by Denmark to participate in the first pan-European wave of projects on hydrogen, IPCEI.