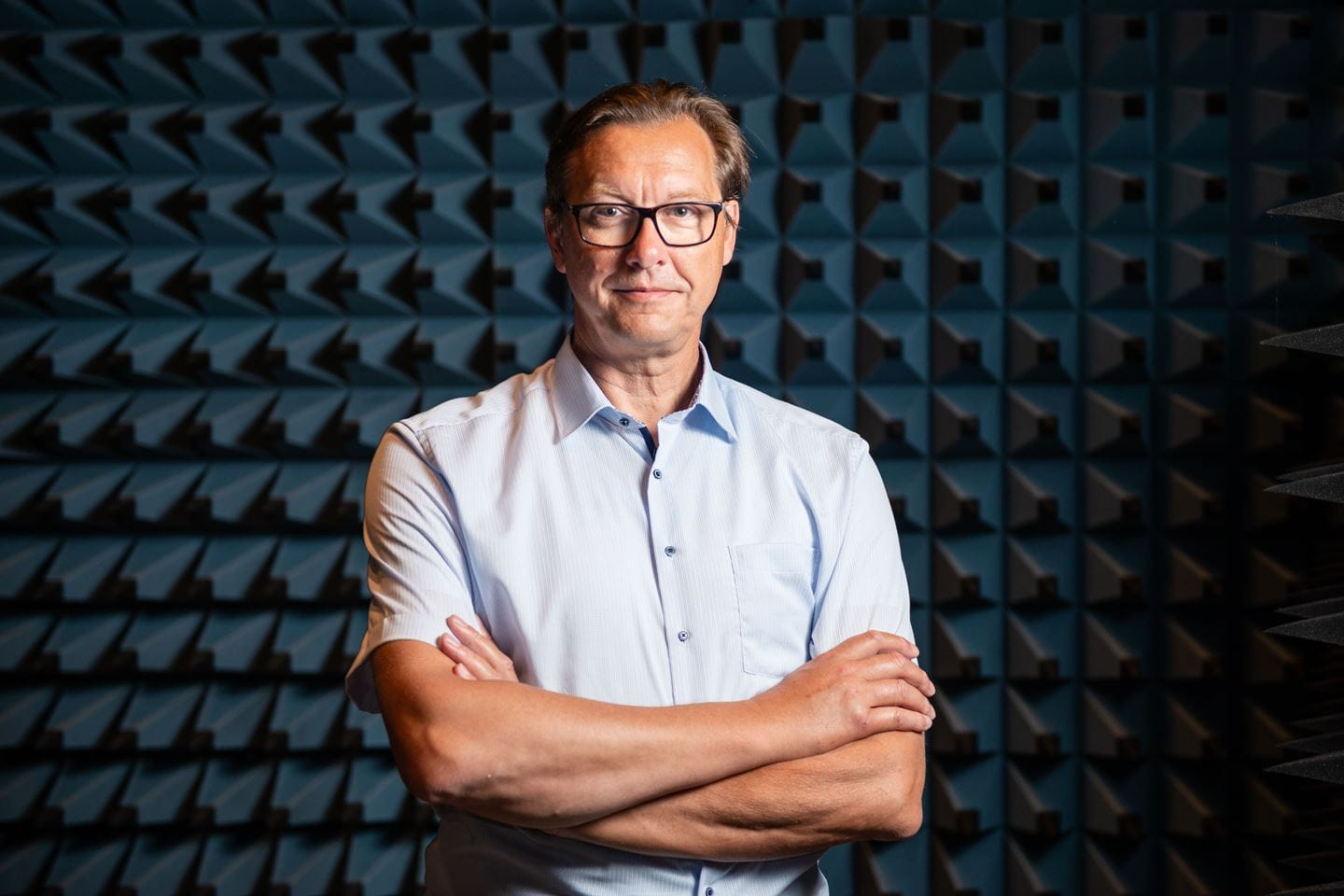 Olav Breinbjerg in the DTU-ESA Spherical Near-Field Antenna Test Facility, one of the world's most advanced radio anechoic laboratories with conditions similar to outer space. Photo by Christian Breinbjerg.

Professor Jacob Østergaard, Chairman of the Award Committee, says: "We're delighted to once again have found three very qualified awards winners. They all deserve great recognition for their ground-breaking research. It's also a perfect fit, as all the winners' research can so clearly be traced back to Hans Christian Ørsted's discovery of electromagnetism 200 years ago."

Troels Krøyer, Chairman of H.C. Ørsted Selskabet, says the following about the winner of this year's main award: "Olav Breinbjerg is one of the world's leading researchers in antennas, antenna measurements, and calculation methods used in wireless communication. His research has profound significance and is of great relevance to society. Olav Breinbjerg's research is based directly on Hans Christian Ørsted's discovery of electromagnetism, and that's why it's especially delightful to be able to hand out the Hans Christian Ørsted research award to him this year."

The two research talent awards will be presented to two young researchers whose work has already won international recognition. The research talents are Anne E.B. Nielsen, who has a PhD in physics from Aarhus University and is currently researching anyons and light, and Dennis Valbjørn Christensen, who has a PhD from the Technical University of Denmark - DTU and conducts research into electromagnetism in nanosystems.

Danish energy company Ørsted's Head of Strategy & Communication, Jakob Askou Bøss, is pleased that the award winners' research may help the green transformation in the long term: "All three winners this year are working on important and fascinating research that also can provide us with new solutions for the green transformation of the world's energy systems. The work of the three award winners is a good example of what it will take for us to still lead the way in the future."

The award ceremony will take place on Hans Christian Ørsted's birthday on 14 August in Rudkøbing, his place of birth on the island of Langeland, south-west of Zealand. Mayor of Langeland Municipality and Hans Christian Ørsted Ambassador, Tonni Hansen, is looking forward to celebrating the award winners at the school Ørstedskolen: "This year, we're going all in on the celebration of the bicentenary year of Ørsted's discovery of electromagnetism, and the entire island of Langeland celebrates Hans Christian Ørsted as the brilliant scientist, cultural personality, language innovator, and pioneer that he was. We're proud that Rudkøbing is where he spent the first important years of his childhood and youth."

Olav Breinbjerg has conducted research into electromagnetism throughout his career, focusing on a wide range of applications of vital importance to society. His international recognition stems, in particular, from his significant contributions in the field of antennas and the measurement of antennas that are to operate from satellites. At DTU, he has contributed to the development of a special antenna measuring method that ensures a very high degree of accuracy in measurements of microwave frequencies used in antennas as well as in mobile phones, radar, satellites, medical equipment, security systems, and more.

Olav Breinbjerg heads DTU's Electrical Engineering's research group Electromagnetic Systems and the DTU-ESA Spherical Near-Field Antenna Test Facility, one of the world's most advanced radio anechoic laboratories with conditions similar to outer space. In the lab, many of the antennas that ESA, the European Space Agency, subsequently sends into space are measured. These include the Ørsted satellite and currently also the new European meteorological satellites MetOp Second Generation, which will be used for climate monitoring, among other things.

Anne E.B. Nielsen, aged 38, heads a research team at the Max Planck Institute in Germany and conducts research into anyons. Using electromagnetism from superconductive coils, she creates extremely strong magnetic fields that make materials behave in new ways. With a simultaneous cooling of the material, a special phenomenon, known as the fractional quantum Hall effect, occurs, where the small, conductive particles of the material - which are otherwise indivisible - appear to split into smaller particles called anyons.

Anne E.B. Nielsen also conducts research into light, which is made up of electromagnetic waves. In this area, her research is opening up new doors for interesting phenomena that combine electromagnetism and quantum mechanics.

Most recently, he discovered how nanoscale electrical polarisation spontaneously occurs in materials where such polarisation is usually not possible. This discovery enables harvesting of clean energy in an entirely new way from vibrations and heat at the same time.

Dennis Valbjørn Christensen is also working on making a simple sensor to detect even ultra-small magnetic fields from the human brain. If he succeeds, he will have created a whole new class of magnetoresistance which is more sensitive than all previous classes, including 'Giant Magnetoresistance', a discovery that was awarded the Nobel Prize in 2007.

The award was created by H.C. Ørsted Selskabet and Langeland Municipality with funding from the energy company Ørsted. The research award is a grant of DKK 50,000 as well as a work of art prepared for the winner by Sabine Majus. The research talent awards are two grants of DKK 10,000 each.