Located far from the Danish coast and in an area of the North Sea with high waves, the Horns Rev 2 offshore wind farm, the world’s largest of its kind at the time, has been covering the annual power consumption of around 200,000 Danish households with renewable energy for the past decade.
When HRH The Crown Prince pressed the red button on 17 September 2009 and officially inaugurated the Horns Rev 2 offshore wind farm, it’s unlikely that many could have imagined how quickly offshore wind power would transform from a marginal niche industry into a global energy technology which now supplies energy to millions of people on three continents. 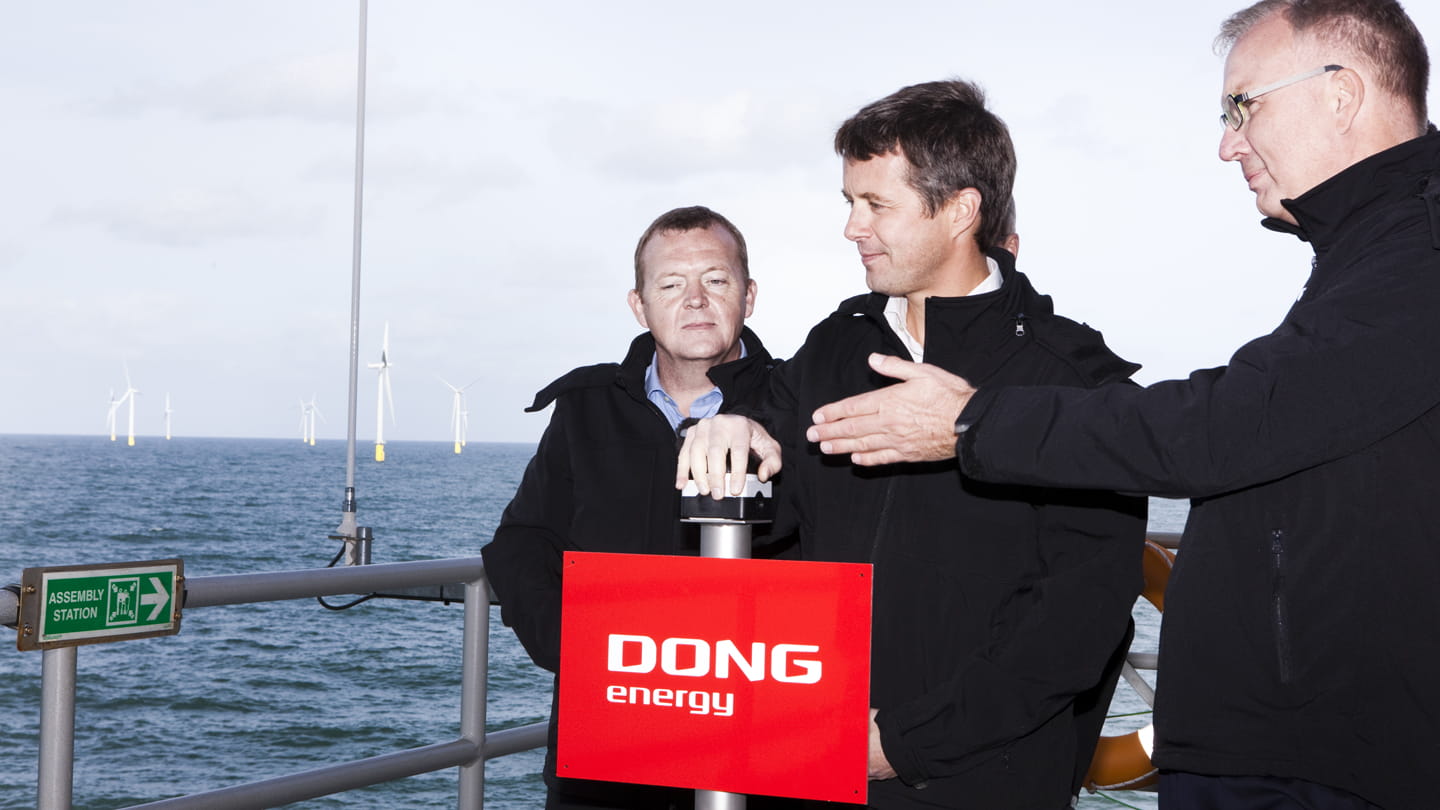 On 17 September 2009, HRH The Crown Prince inaugurated the Horns Rev 2 offshore wind farm in the presence of Lars Løkke Rasmussen, the then Danish Prime Minister, and Fritz Schur, the then Chairman of Ørsted’s Board of Directors.
World’s largest at the time
At the inauguration, Horns Rev 2 was the world’s largest offshore wind farm, but at the same time also the first offshore wind farm located that far from shore and in waters with such high waves. Already from the outset, great focus was therefore on quality and logistics in the design of the wind farm. Therefore, the 91 wind turbines are placed in a fan formation to better utilise the wind, and the foundation is constructed of both steel and concrete, so it’s better equipped to withstand the extreme conditions at sea. Furthermore, an accommodation platform was installed in connection with an offshore wind farm for the first time in history.

“Horns Rev 2 has meant that we’ve had to be innovative and develop new ways of working and organising the work right from the outset, so we can keep on ensuring that we generate large volumes of green power on a daily basis, while at the same time maintaining a high safety standard,” says Allan Due Overbeck, Head of Operations for Horns Rev 2. 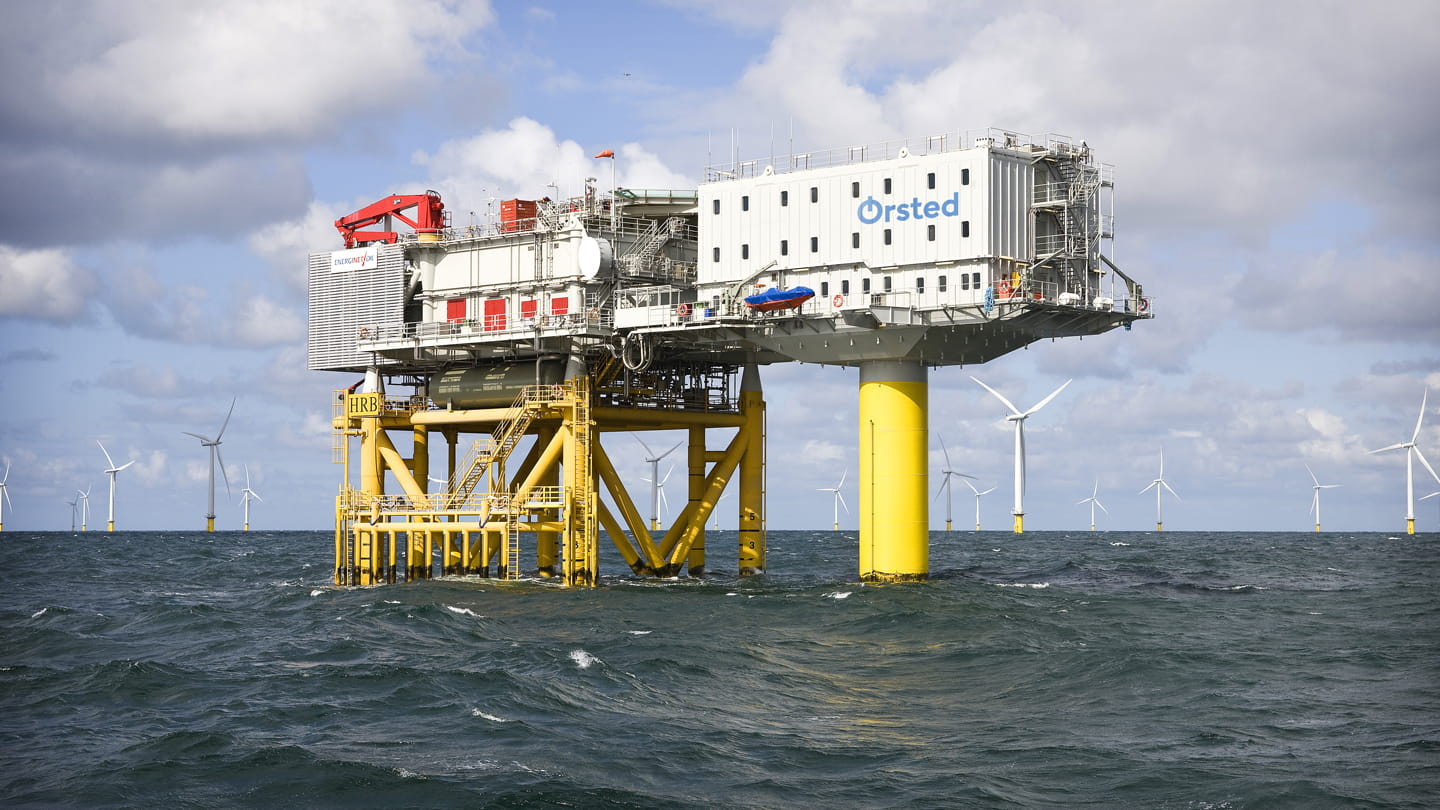 As Horns Rev 2 is located in the North Sea at a distance of 60 kilometres from the Danish Port of Esbjerg, an accommodation platform was installed for the first time ever in connection with an offshore wind farm.
Actually, Ørsted is currently commissioning the offshore wind farm Hornsea 1 in the North Sea approximately 120 kilometres off the Yorkshire coast in the UK. Here, each wind turbine has a capacity three times that of a wind turbine at Horns Rev 2, and the wind farm will have a total capacity of 1,218MW, making Hornsea 1 the largest offshore wind farm in the world once it’s ready for production at the end of 2019.

Facts about Horns Rev 2
As follow-up on a broad political agreement in the Danish Parliament, the political basis for the construction of two offshore wind farms of 200MW each was ensured in 2004 and, after screening rounds, it was decided to place one of them at Horns Rev. Following a call for tenders, Ørsted was awarded the right to construct Horns Rev 2 in 2005, and four years later, the wind farm’s 91 wind turbines, which have a total production capacity of 209MW, could supply renewable energy equivalent to the annual power consumption of 200,000 Danish households.

Horns Rev 2 was the world’s largest offshore wind farm at its inauguration in 2009. The wind farm is located in the North Sea, 30 kilometres west of Blåvandshuk on the Danish west coast. Horns Rev 2’s operation and maintenance organisation with approximately 40 employees is based in Esbjerg.