Three of DONG Energy's power stations have said goodbye to coal and gas, and the next in line is now well on the way. Skærbæk Power Station is getting ready for the transition to green energy, and the first shipload of sustainable wood chips has arrived. The shipment of 3,546 tonnes of wood chips is the first of several before the power station can commence its production of green energy. 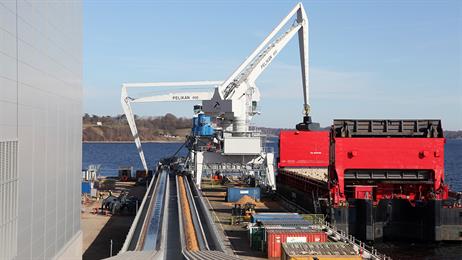 The first shipment of wood chips will be used to adjust the cranes and the wood chip conveyor belts, and DONG Energy does not expect the next load to be collected until the first barge has been emptied.

The transport of wood chips to Skærbæk Power Station will primarily take place via ships and barges, and ship calls will mainly take place during the winter months as deliveries will follow demand during the heating season. The ships will generally carry between 6,000-16,000m³ of wood chips. The existing quay has been renovated and extended to accommodate the ships, which will be up to 175m in length.

Efficient unloading of ships and barges

A new wood chip conveying system and two new unloading cranes at the quay will ensure efficient unloading of ships and barges. The cranes will lift the wood chips from the ships using closed crane grabs and place them in large funnels equipped with exhaust ventilation to reduce dust nuisances. From here, the wood chips will be transported on conveyor belts to the open wood chip storage facility.  The open wood chip storage facility has a maximum height of 30m and can store up to 80,000m3 of wood chips. This equates to approximately nine days of maximum heat production at Skærbæk Power Station.

Ready for the heating season

The green Skærbæk Power Station is expected to be ready for the next heating season. From then on, the power station will use only wood chips produced from wood waste for the production of district heating to the Triangle Region Denmark.