Horns Rev 1 marked the beginning of a new industry - the offshore wind industry. DONG Energy participated right from the beginning. 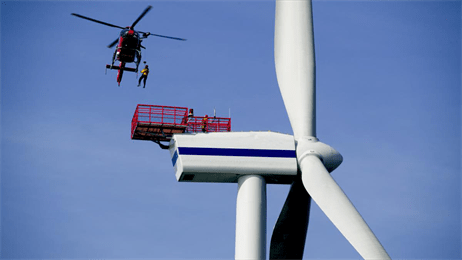 Horns Rev 1 consists of 80 Vestas 2.0MW wind turbines and has a total capacity of 160MW.
The wind farm is located approximately 20km west off Blåvandshuk on the west coast of Jutland.
Vattenfall operates Horns Rev 1 and owns 60 percent of the wind farm. DONG Energy owns 40 per cent.
Wind turbine number 6 located in the westernmost row of the Horns Rev 1 Offshore Wind Farm off Jutland's southwestern coast at Blåvandshuk has generated 100GWh of electricity - or the equivalent of 100 million KWh, joining the exclusive club of a handful of other wind turbines worldwide that have generated just as much electricity as this has since we installed it.
The offshore wind farm was constructed in 2002 by Elsam and at the time, Jens Wittrock Bonefeld handled the project manager role, which would correspond to an EPC Director today. At the time, Bonefeld reported to Flemming Thomsen who was the programme manager of the project and had the overall responsibility for Elsam's small but growing wind business.
Bonefeld said: "Horns Rev 1 was a pioneer project. It was the first large-scale offshore wind farm ever to be constructed and our project team consisting of a total of approximately 50 employees had to virtually start from scratch in terms of design, technology, surveys and what was otherwise required to construct the wind farm."
The beginning of a new industry
As it was the first large-scale wind farm, existing technology or technical solutions developed to construct offshore wind farms were only available to a limited extent, among other things. This meant that we developed many of the technical solutions that we use today as we faced new challenges while constructing the project.
Bonefeld continued: "Even if there was a lot of let's call it 'cowboy engineering' in terms of our way of doing things back then, Horns Rev 1 became the beginning of an offshore industry which has just kept growing ever since. Many large and small companies, which today are part of the supply chain for wind turbines, foundations, cables and other equipment for large projects worth billions, stepped into the sea for the first time at Horns Rev 1."
A pipeline is taking shape
At the time, the Danish authorities instructed Elsam to construct Horns Rev 1 to the west while the Danish energy company Energi E2 was instructed to construct a project to the east. This project is known as Nysted Offshore Wind Farm today. The two projects attracted a lot of attention, not least internally where the two companies, together with the former Dong, saw the potential within the offshore wind farm area and ended up securing individual project rights outside Denmark.
As the three companies, together with the Danish utilities Nesa, Københavns Energi and Frederiksberg Forsyning in 2006 merged and became DONG Energy, they had between them such a large and well-developed pipeline of offshore wind projects that the seeds for a possible adventure were sowed. Also for Jens Wittrock Bonefeld personally, this opened the door to a number of new opportunities.
Bonefeld concluded: "The high ambitions meant, among other things, that I was offered the possibility to work on some of the projects which we acquired in the wake of the Horns Rev 1 project in the newly established DONG Energy. They were, among others, the Burbo Bank Offshore Wind Farm and the London Array Offshore Wind Farm in the UK."
In connection with the merger in 2006, Vattenfall took over 60 per cent of the offshore wind farm and have been operating it since. DONG Energy has a 40 per cent ownership share.
The offshore wind farm Horns Rev 1 with a total capacity of 160MW has been spinning for approximately 13 years now, and wind turbine number 6, which has generated 100GWh, has generated enough power by itself to supply all the households in the Danish city Vejle in Jutland or Canterbury in the UK with power for an entire year.