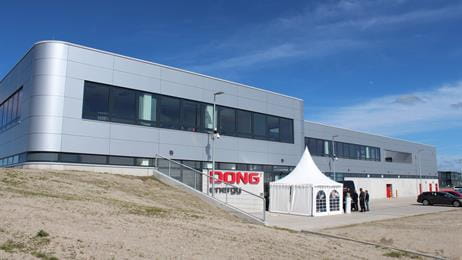 Brief overview of the most important construction phases:

Norden-Norddeich. DONG Energy is officially opening its operation management centre at Norddeich harbour today in the presence of the Parliamentary State Secretary Enak Ferlemann (Federal Ministry for Transport and Digital Infrastructure), Norden's Mayoress Barbara Schlag and invited guests from business, public administration and politics.
In her welcome speech, Trine Borum Bojsen, Managing Director for Germany of DONG Energy, said: "Today is a special day for me and my colleagues. Because this building symbolises the long service life of our offshore wind farms. Our service technicians will run Borkum Riffgrund 1 and Gode Wind 1 and 2 for at least the next 25 years from here."
The Papenburg-based company JOHANN BUNTE Bauunternehmung was awarded the construction contract in February 2014. As a result, the next construction phase began on the 30,000m2 harbour campus of DONG Energy – the Danish company's construction supervision office has been located there since September 2013. Construction of the company's own German offshore wind farms Borkum Riffgrund 1 and Gode Wind 1 and 2 is coordinated from there. DONG Energy has invested a total of 15 million euros in upgrading the location in Norddeich.
As regards the building itself, DONG Energy is committed to renewable sources and sustainability. Heat will be supplied by means of geothermal energy. The gross area is around 3,500m2 and is made up of office and changing rooms, a canteen, a workshop and storage rooms.
The Borkum Riffgrund 1 wind farm has a total capacity of 312MW and consists of 78 turbines. It is located 54km off the coast and when completed will produce enough green electricity to supply around 320,000 German households every year. Installation of the turbines is now being completed. Commissioning is scheduled for the summer of 2015.
Gode Wind 1 and 2 has a total capacity of 584MW and 97 turbines of the 6MW class. That means Gode Wind will be Germany's largest offshore wind farm once completed. Offshore construction began in mid-April with installation of the first foundations. The wind farm is scheduled for completion in 2016. Gode Wind will then produce enough electricity to supply 600,000 German households.