The last CHP unit at Avedøre Power Station will be converted making it able from 2016 to use wood pellets as fuel instead of coal. This can provide green heat for an additional 65,000 households in the Greater Copenhagen area. 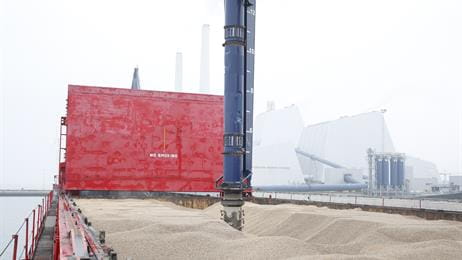 From the autumn of 2016, the largest power station in Denmark will be able to generate heat based entirely on wood pellets and straw instead of coal and gas.

"The decision to convert unit 1 at Avedøre Power Station means that we'll now be in a position to abandon coal and gas entirely when we're generating heat for more than 215,000 households in the Greater Copenhagen area. It's a significant step in the green conversion, taken in a cost-effective way."

VEKS and DONG Energy have just signed a new agreement which means that from 2016 until 2033, unit 1 at Avedøre Power Station will be able to supply green heat to VEKS' customers. The agreement forms the basis of the investment in converting and prolonging the lifetime of the CHP unit and is a significant contribution to the Danish capital's ambition of being CO2 neutral in 2025.

"To VEKS, unit 1 at Avedøre Power Station has always been exceptional. When the unit was put into operation back in 1990, the western part of the Greater Copenhagen area and consequently VEKS got its own CHP plant. And soon, the entire power station will be able to supply CO2 neutral energy. This is completely in line with the decision made by the board of directors of VEKS in 2010 to supply CO2 neutral district heating. If you want the same, short work can be made of the process from decision to realisation. First, unit 2 at Avedøre Power Station was converted to 100 per cent biomass and, with the new agreement, unit 1 will supply green district heating already from the end of next year. The conversion of Avedøre Power Station to run 100 per cent on biomass is a project that we can all be proud of."

The conversion which is financed by DONG Energy and VEKS will be initiated in April this year and is expected to be completed during the autumn of 2016. With this conversion, the coal-fired unit 1 will also be able to use wood pellets and in future, wood pellets will be used as primary fuel for heat generation.

"By using more wind and biomass, DONG Energy has reduced our coal consumption by 65 per cent since 2006. And we have a target stating that at least half of the electricity and heat generated at our power stations in 2020 will be based on sustainable biomass instead of coal and gas. This will give the Danes cost-effective green energy with a high degree of security of supply."

When unit 1 has been converted, Avedøre Power Station expects to be able to produce district heating based on biomass for approximately 215,000 Copenhagen households as well as electricity corresponding to the annual consumption of more than 600,000 households.