New collaboration to explore the technological, regulatory, and commercial possibilities of developing carbon capture at biomass-fired heat and power plants. 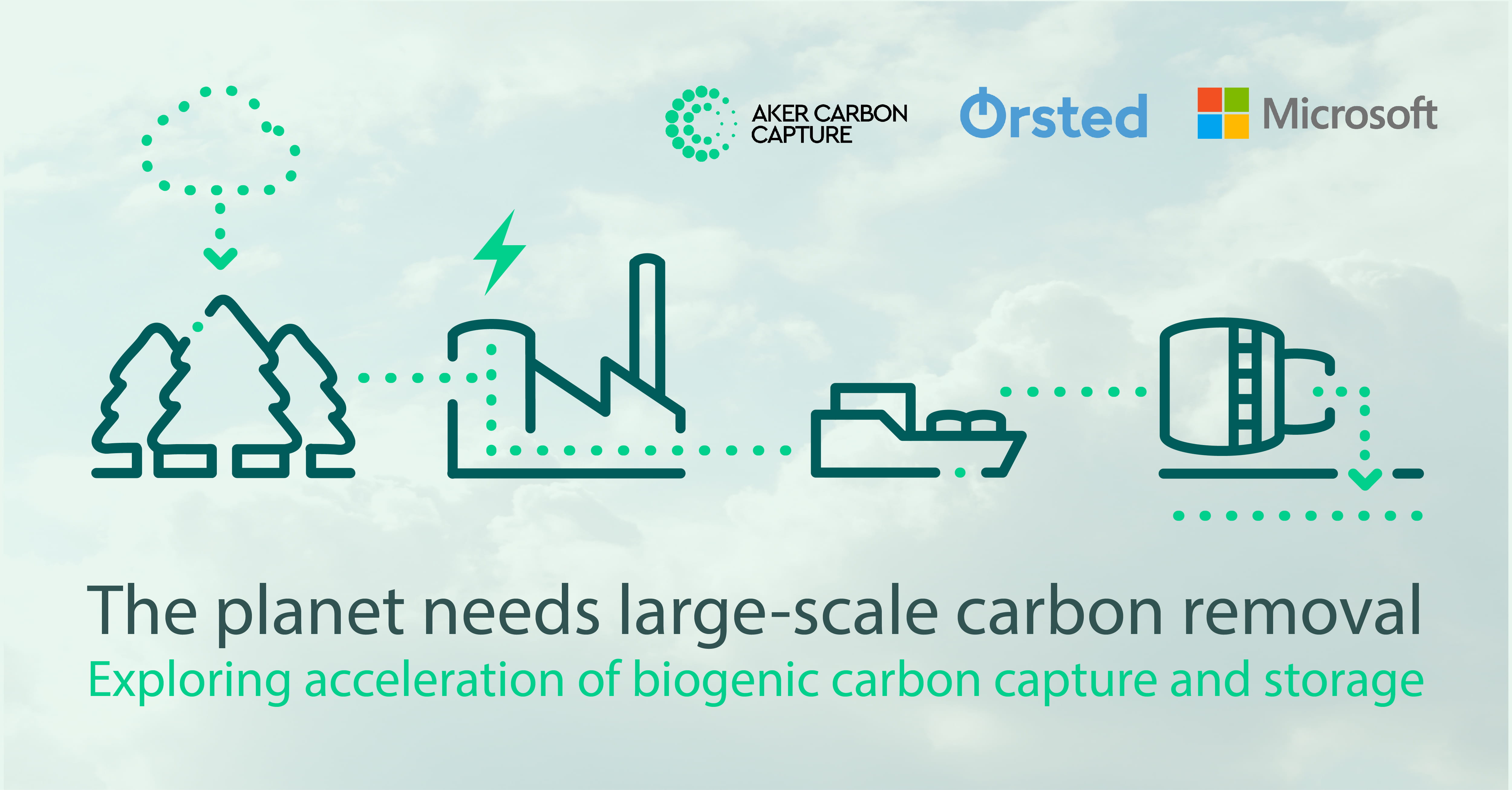 Ørsted, Aker Carbon Capture, and Microsoft have signed a memorandum of understanding (MoU) to explore ways to support the development of carbon capture and storage at biomass-fired heat and power plants in Denmark.

Carbon capture and storage is widely accepted as an important instrument to meet both the Danish climate targets of 70 % carbon reduction by 2030 and to meet the Paris Agreement's goal to limit global temperature increases to 1.5 degrees Celsius.

By capturing the carbon emitted by biomass-fired heat and power plants and storing it underground, it is possible to not only reduce, but also remove carbon from the atmosphere, as carbon from sustainable biomass is part of a natural biogenic carbon cycle.

The three companies will cooperate to address technological, regulatory, and commercial challenges and opportunities for creating negative emissions by capturing and storing carbon emitted by biomass-fired heat and power stations, with each party playing crucial and distinct commercial roles.

Under the terms of the memorandum of understanding, the parties agreed to:

Through the successful completion of activities within these four areas, it is the ultimate vision of the parties to drive forward the process of facilitating negative emissions and reaching actual operation of a commercial and technical setup creating substantial negative emissions.

Today, Ørsted has six biomass-fired units and provides around one quarter of Denmark's district heating. The biomass used as fuel at Ørsted's heat and power plants comes from sustainably managed production forests and is surplus wood, such as sawdust from sawmills or residues from trimming or crooked trees. This wood is of a too low quality to be used for construction or furniture. The surplus wood can either be left to rot or be burned in the forest, or it can be used for example to replace gas and coal in energy production. All the surplus wood that Ørsted sources comes from growth forests which means that the carbon emitted when the surplus wood is converted to energy is recaptured by the forest within the span of a few years.

Even though Ørsted foresees that technologies based on renewable power will replace a substantial part of bioenergy in the district heating towards 2040, it expects carbon capture at a number of biomass-fired units to play an important role in the energy transition.

"Carbon capture will most likely be an important part of the green transition, and we see opportunities for capturing the carbon at some of our biomass-fired heat and power plants and either store it underground in order to achieve negative emissions or use the carbon for the production of green fuels in Power-to-X facilities. Therefore, we're currently exploring the regulatory, technical, and economic possibilities of carbon capture at our facilities," says Ole Thomsen, Senior Vice President at Ørsted.

Microsoft globally participates in several initiatives to drive the reduction of carbon emissions, and Microsoft has been carbon neutral across the world since 2012 and commits to being carbon negative by 2030. Their goal is to promote sustainable development and low-carbon business practices globally through sustainable business practices and cloud-enabled technologies.

"Partnership across sectors and digital innovation are key in the fight against climate change. The plan to achieve the Danish ambition of 70 % carbon reduction by 2030 relies in part on carbon capture and storage at scale, and we're excited to support this alongside Ørsted and Aker Carbon Capture," explains Nana Bule, General Manager, Microsoft Denmark and Iceland.

Aker Carbon Capture has developed carbon capture technologies and delivered projects for more than ten years and today has the solutions to support customers across several industries, establishing sustainable business models for the future.