DONG Energy's new Hejre platform is being prepared for installation. 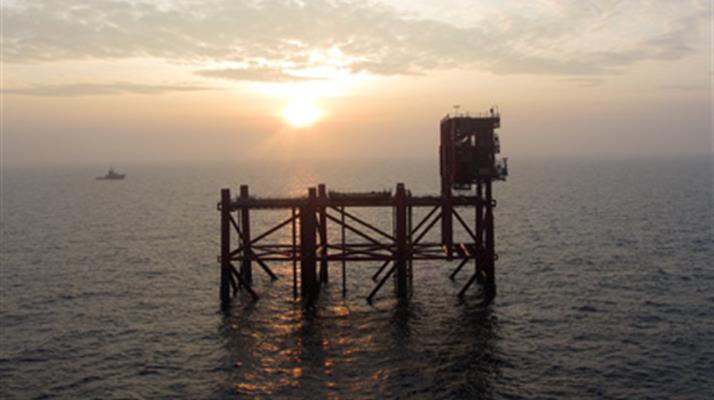 In March 2012, DONG Energy awarded the consortium formed by Technip and Daewoo Shipbuilding & Marine Engineering (DSME) the task to design and deliver the complete Hejre platform. The consortium teamed up with the subcontractor Heerema Fabrication Group to construct and deliver the jacket for the Hejre platform.
An important part of our strategy
One of DONG Energy’s strategic goals is to double the oil and gas production.
The Hejre development is an important step for E&P on its way to reaching those targets, meaning that E&P must increase its production from 78.000 boe/day in 2012 to 150.000 boe/day in 2020. In 2015, DONG Energy expects to start commercial production from the Hejre field in co-operation with Bayerngas. DONG Energy is operator. The investment is the largest investment in the Danish sector of the North Sea for many years.
In Vlissingen, the Netherlands, the employees at the Heerema yard are working hard to finish the construction of the Hejre jacket in time for the planned installation in the North Sea, in the early summer of 2014.
The Hejre development is an important step for DONG Energy on the way to reaching the company's targets of doubling the oil and gas production by 2020.
The construction of the jacket started by assembling and welding together hundreds of smaller structural components into rows. The first pair of rows was joined by bracings and crossings and forms a 90-metre long and 30-metre high box structure.
More than 80% completeMore than 80% of the work tasks for the jacket have already been finished, but the major elements still have to be fitted together.
On 18 December, the third row, the 1,000 tonnes heavy row, which was welded together next to the box structure, was ready to be tilted from horizontal to vertical position in a 'roll up' operation.
Four heavy cranes, two with a capacity of more than 310 tonnes each, were aligned to lift the one side of the row, and the other side should rotate in the teflon-support guides already prepared.
In a 4-hour long lifting process, the outer side of the row was lifted – slowly bit by bit - while the cranes moved in a co-ordinated procedure after Row 2 turned upwards slowly. With less than 15 degrees left, heavy stationary winches took over, and in a very controlled movement the wires pulled the row to its vertical position.
By mid-January 2014, the final row will be rolled up in a similar process, making the structure look like the real jacket. Once these operations have been completed, the jacket weight will have increased to almost 7000 tonnes.