A REnescience mobile unit has been working in Malaysia to test whether Malaysia could be a potential new export market for the REnescience technology. 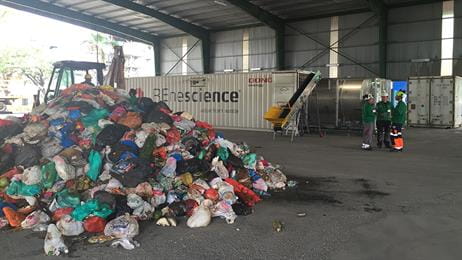 <em>Every other day we receive five to six tonnes of waste in Malaysia for testing.</em>

According to the World Bank, waste volumes worldwide will have increased by 70 per cent by 2025 compared with 2012.

And in those countries where waste streams are growing the most, they do not have the right resources to handle it. Therefore, we are now sending our REnescience unit out into the world to test where our technology can help solve waste problems.

In April, DONG Energy signed a Memorandum of Understanding with Malaysian Cenviro to investigate the possibilities of building REnescience plants in Malaysia. We are now in the process of maturing the first plant, and in this connection, we have sent our REnescience mobile unit to Malaysia to test local waste treatment.

On 10 June, the REnescience mobile unit arrived at the Kualiti Alam Waste Management Centre in Malaysia. And the unit and the accompanying REnescience team have been busy testing how much biogas the technology can extract from the Malaysian household waste.

Hanne Risbjerg Sørensen, Head of Technology in New Bio Solutions, said: "We've been carrying out six tests in June. We have tested one tonne of waste at a time, which we received from different areas south of Kuala Lumpur."

New waste every other day

Together with employees from Cenviro, one of Malaysia's largest companies within waste management, five employees from DONG Energy have been testing the REnescience technology's potential in a Malaysian context.

"To be able to extract a representative sample for our mobile test facility, we received a truck with five to six tonnes of waste every other day, of which around one tonne was fed into the plant. In addition, we sorted approx. 700kg of waste to examine the composition of the household waste typically found in the area," said Risbjerg Sørensen.

Over the past year, DONG Energy has designed, built and tested the REnescience mobile unit which we send out into the world to test waste and identify potential export opportunities. First stop was Malaysia, where the unit was operating in June.

The construction of the first full-scale REnescience plant is well underway near Manchester in the UK. The plant, which will be able to handle 120,000 tonnes of waste a year, is expected to be operational at the beginning of 2017.