One step closer to a green future for Asnaes Power Station

The plan to make it possible for Asnæs Power Station to run on woodchip rather than coal is becoming more tangible. 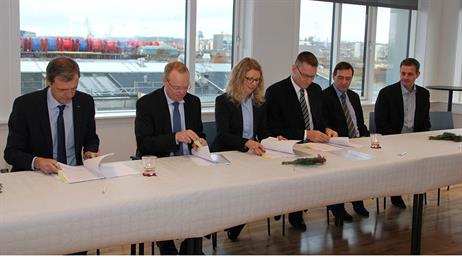 The Danish utility company 'Kalundborg Forsyning', Novo Nordisk, Novozymes and DONG Energy have taken another step towards a solution whereby, as from the end of 2018, Asnæs Power Station will be able to deliver steam, heating and electricity generated using sustainable woodchip instead of coal. The parties have agreed on the form a future working relationship is to take, and they will now start work on finalising a concept under which a new biomass-fired CHP plant will be built at Asnæs Power Station and connected to the existing installations and systems at the station.

"I'm delighted that we’ve reached agreement with our heating and steam customers on a sustainable concept that we are to develop further. We've now come much closer to a solution in which Asnæs Power Station can continue delivering heating and steam to both private citizens and enterprises in Kalundborg."

The parties have examined a variety of opportunities to establish a more eco-friendly supply of heating and steam when the existing contracts with DONG Energy expire at the end of 2017. Novo Nordisk, Novozymes, Kalundborg Forsyning and DONG Energy have now agreed to continue with the plans for a new woodchip-fired CHP plant that is to be an integrated part of Asnæs Power Station. Under the plans, Asnæs Power Station will receive a new, but smaller, boiler and turbine whose size will better match future needs for electricity, steam and heating.

"For Kalundborg Forsyning, it is essential to secure a good, inexpensive supply of district heating for customers in Kalundborg, while simultaneously contributing to the transition from fossil fuels to a sustainable solution.

"With a new woodchip-fired CHP plant, Asnæs Power Station will be able to use sustainable woodchips as fuel instead of coal when delivering heating for district heating customers and steam for commercial companies.

Per Magnus Hammer, VP for Sourcing at Novozymes, and Michael Hallgren, Senior Vice President for Production at Novo Nordisk Kalundborg and chairman of the industrial symbiosis in Kalundborg, said:

"We're pleased to have concluded an agreement that will ensure a stable supply of steam well into the future. It is important to us that the steam is generated from biomass rather than coal because this is a more eco-friendly solution, and because the price is competitive .The agreement underpins the symbiosis partnership in Kalundborg and is yet another example of how neighbourliness and dialogue can generate powerful results for the benefit of all parties. Both Novo Nordisk and Novozymes have already converted power consumption at their Danish production sites to green power from wind turbines. The switch to 'green steam' marks another important step towards even more sustainable production.

"The plans are now to undergo final analysis, the relevant approvals have to be obtained from the authorities, and the parties need to reach agreement on the new steam and heating contracts.

The parties have agreed that they have taken an important step towards an agreement concerning heating and steam supply from the end of 2018. They are now looking forward to seeing the results of the analysis work and the ongoing negotiations, which they expect to lead to a decision to invest in the construction of a new CHP plant at Asnæs Power Station.