DONG Energy have been awarded two new licenses in the 28th Licencing Round in the UK. 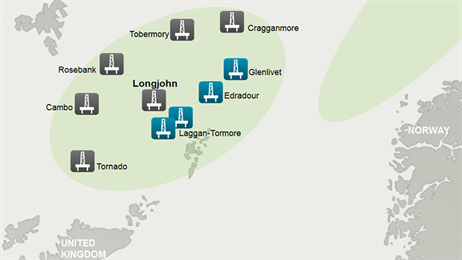 In one of the biggest licensing rounds for five decades, two new licenses were awarded to DONG Energy and partners in the West of Shetlands.

"I am delighted that our commitment and efforts in the West of Shetland have been rewarded with these two licence awards. In the Laggan-Tormore hub we already have fields being developed and some further discoveries. Adding an exploration license in this area gives even more potential for future production, strengthening our position around the Laggan-Tormore hub. In addition we are now to enter in to an exciting frontier area."

The first license has been named 'Longjohn'. DONG Energy has a 20% stake, with the operator Total owning the remaining 80%. Longjohn is thought to be a gas field adjacent to the existing Laggan-Tormore. A gas discovery at Longjohn could potentially use this infrastructure currently being installed in the Shetlands by Total and DONG Energy.

A second licence has been awarded in the frontier Rockall Basin. This will see DONG Energy partnering with Statoil and OMV as the operator. This prospective oil area is based North West of the Outer Hebrides in a previously little explored region of the UK Continental Shelf, any exploration success here would open up the area for future activity.

"We are very satisfied as we received the licenses, that we applied for. We have strengthened our position in the Laggan-Tormore hub, and we have established ourselves in the North East Rockall Basin in which we see a big potential."