With enough reinforced steel for one quarter of the Eiffel Tower and enough concrete for 57 highway bridges, the conversion of Skærbæk Power Station is well under way. Over the weekend, the power station’s neighbours had the chance to see the construction work up close. 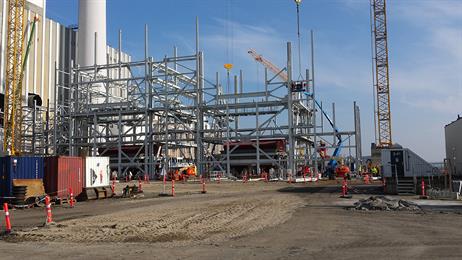 "We will connect the new wood chip boilers to the existing CHP plant to enable the highly flexible generation of electricity and heat from both natural gas and wood chips."

He faces a giant puzzle of steel parts, concrete foundations, machinery and people in his role as project manager, in which he has to maintain an overview of the construction work.

"There are around 150 people working on the building site right now. But come the new year, when we start installing the boilers and fuel handling system in earnest, there'll be close to 500 men on site. Many will be specialist welders and technicians, who have experience of building these sorts of facilities across the globe."

In addition, large quantities of steel and concrete are required for expanding the power station’s port facility, as well as the establishment of a large, open wood chip storage facility with space for up to 80,000 cubic metres of wood chips. Reinforced steel equivalent to a quarter of the weight of the Eiffel Tower and enough concrete for 57 highway bridges will be used in the construction.

A look behind the scenes

Over the weekend, DONG Energy invited Skærbæk's neighbours to the 'open day event' at the construction site so that they could get an insight into this huge construction project.

"There was a good deal of interest and many questions from the over 200 guests from the local area who visited us on Saturday to take a guided tour of the site and to find out more about what we're up to and how far we've come."

Leif Høgh Sørensen expects that DONG Energy can start the commissioning of the plant in the autumn of 2016, enabling the power station to supply district heating based on wood chips in the 2016/17 heating season. The entire conversion of Skærbæk Power Station, which also includes commissioning and service trials, is expected to be completed in April 2017.