The construction of the world's first REnescience plant is progressing rapidly in the north west of England. 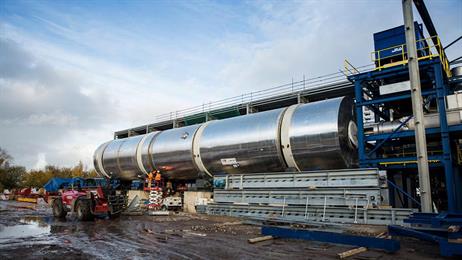 In February 2016, the construction of the first full-scale REnescience plant was commenced, and the plant is scheduled for commissioning in spring 2017. Therefore, there is plenty of activity at the construction site in Northwich in the north west of England.

"Now, the plant is really starting to take shape. The entire area where we'll produce biogas which is to be converted into green power is almost ready. And we're now in the process of installing the two large bioreactors where we'll use enzymes and water to extract all organic fractions from the waste," says Flemming Kanstrup, Project Director in DONG Energy.

The REnescience plant in Northwich will be handling unsorted household waste without prior treatment. The waste will be mixed with water and enzymes in two large bioreactors with a length of more than 50 metres and a diameter of more than 5 metres.

When the waste is fed into the plant's bioreactors, the actual chemical process will start, and the enzymes will dissolve food waste, labels and similar types of organic waste and turn it into a liquid that can be used for producing biogas. The biogas will be used to produce approximately 5MW power, and the remaining part of the waste will consist of a reusable part, consisting of, eg, plastic and metal, and a part to be used as fuel.

The REnescience technology will extract as many resources as possible from the waste.

"Our ambition is that our innovative waste treatment plant in the UK will be paving the way for more intelligent and circular utilisation of waste," says Thomas Dalsgaard, Executive Vice President, DONG Energy.

The Northwich plant can process 120,000 tonnes of waste a year, equivalent to the waste generated by approximately 110,000 UK households. The waste will be supplied by the UK waste management company FCC Environment, which already collects household waste in the area.