Give a stove via your electricity bill

A new electricity product from DONG Energy receives the Danish Ecological Council’s class A label, supports a local environmental project in Kenya and saves the environment for CO2 emissions. 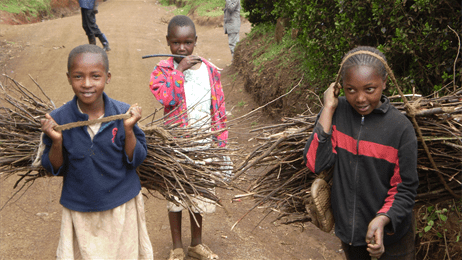 Facts about our new electricity product

With ‘Basis El med omtanke’ you commit yourself for five months from the time you sign the agreement. Subsequently, you can terminate your agreement on one month's notice taking effect at the end of a month.

The minimum price is DKK 245.00 (DKK 29 per month in subscription fee + DKK 20 per month in contribution) as well as the price for the continuous electricity consumption during the period of commitment and the notice period. On account settlement each quarter.
DONG Energy has just launched the electricity product ’Basis El med omtanke’ (in English: Basic electricity with care) which has received the coveted class A label from the Danish Ecological Council. This means that the product is among the market’s very best electricity agreements with a climate-friendly profile.

More specifically, the monthly extra goes to the project 'Kisumu Improved Cook Stoves' in Kenya. The project creates climate improvements by enabling poor families in Kenya’s rural districts to cook on stoves instead of over an open fire. The stoves are more efficient than the traditional open fires and therefore, they will also use less firewood when cooking. Furthermore, stoves generate less smoke.

Louise Hahn, Vice President of Sales B2C in Customers & Markets, said: "When using a stove instead of an open fireplace, more energy is extracted from the wood and less hazardous smoke is developed in the house. This has a positive impact on the climate and provides a healthier indoor climate.

Recognition from the Danish Ecological Council

The class A label from the Danish Ecological Council is a pat on the back.

Hahn continued: "We wanted to give our customers the greatest possible assurance that their contribution makes a positive difference and contributes to genuine climate improvements. Therefore, we’re pleased that the Danish Ecological Council has given us their seal of approval."