Giant coal cranes to be decommissioned at Asnaes Power Station

The big, yellow coal cranes at Asnæs Power Station's port will be decommissioned and removed due to declining coal consumption and increasing energy production from renewable energy sources. 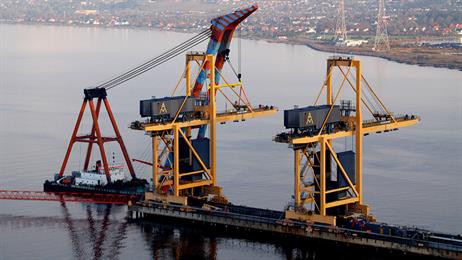 "In future, the coal-fired power station units at the power station will be either out of operation or in reduced operation, and we've therefore decided to remove the coal cranes," says Niels Christian Kjær, Regional Manager in DONG Energy.

The two coal cranes are both 60 metres tall, and each is capable of lifting 32 tonnes of coal at a time. Capacity like that is no longer needed. As a consequence, Asnæs Power Station got a mobile crane and a new transport system as a replacement for the two coal cranes in December 2015. The new mobile crane and the new transport system are better suited to the present needs where operations are primarily handled by unit 2.

The two coal cranes were designed to service five power station units, but due to the declining coal consumption at Asnæs Power Station, a smaller and more flexible system is a better solution.

"The removal of the coal cranes is part of adapting Asnæs Power Station to the future market. Apart from the greatly reduced coal consumption, the cranes also require maintenance, which is yet another good reason for removing them at this point in time," explains Niels Christian Kjær.

Sustainable treatment of the materials

Naturally, the decommissioning of the coal cranes also means that a great deal of the materials can no longer be used. However, the materials used to make the cranes will not go to waste. All materials will be separated at source and recycled.

"It's important that the cranes are dismantled properly and safely, and that the materials used are treated in a sustainable manner. All materials will be sorted and recycled – from cables to electronics – and everything will all be handled in cooperation with a certified partner," says Niels Christian Kjær.

A floating crane will decommission the cranes and place them on land at Asnæs Power Station's coal yard, and then they will be separated by an excavator fitted with metal-cutting shears. This work is expected to take two weeks.