From biomass to green energy

Novozymes, Novo Nordisk, DONG Energy and Bigadan are investigating the possibility of producing biomass-based biogas. The preinvestigation is expected to last a year or more. If the results from the preinvestigation confirm the preliminary analyses, the parties intend to go ahead and realise biogas production. 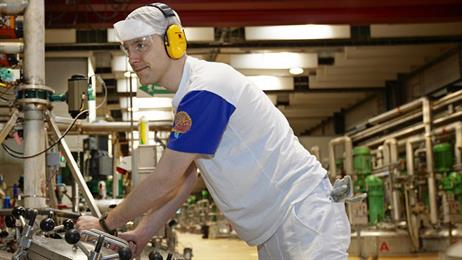 Biomass is organic material which can be broken down by bacteria, which in this case form methane and carbon dioxide. It is the same process which originally formed natural gas over many years. The biomass remains for about a month in the biogas reactor at a temperature corresponding to that of the human body while it produces biogas. Once the biomass is degassed, it is spread as fertiliser on fields. In fact, the biogas process means that the biomass has a higher fertilisation value for the plants.
In Kalundborg on Zealand, Novo Nordisk and Novozymes have extensive factory facilities which produce enzymes and insulin that are sold all over the world. Biomass is a by-product from production, and is already used today as a fertiliser on fields and also by Novo Nordisk to produce biogas at installations around Zealand.
However, a project to explore the possibilities of also using this biomass for biogas production is now entering a new phase. Bigadan and DONG Energy have been chosen as partners for the study.
Gerrit Liebgen, Director EMA Operations for Novozymes, and Michael Hallgren, SVP (production of API) at Novo Nordisk, both in Kalundborg, said: "It's an exciting project which will look at whether it's a good idea to use our production here in Kalundborg as a source of biomass for large-scale biogas production. It would mean that the biomass will both be used as a fertiliser – and for green energy. This doesn't just make sense for the environment, but also financially for our production."
The parties are now conducting more detailed analyses of the potential and looking to have a new plant approved by the relevant authorities. If the project is realised, Bigadan and DONG Energy will build and own the biogas plant, the plan being to build it close to Asnæs Power Station, which lies just south of Kalundborg. Novo Nordisk and Novozymes supply biomass from their factories in the city and from their facility at Fuglebakken in Copenhagen.
Karsten Buchhave, CEO of Bigadan A/S, said: "I'm proud that Novo Nordisk and Novozymes have chosen Bigadan as their partner. With more than 30 years of experience in the biogas industry, Bigadan will more than meet their expectations."
For Morten Buchgreitz, Executive Vice President at DONG Energy, the plans mark a new direction for the collaboration between Novo Nordisk, Novozymes and DONG Energy, and said:
"We've cooperated well together for many years. Through our climate partnerships, we have, for example, realised energy savings which have reduced the companies' energy costs to the tune of millions of kroner. I'm delighted that we can build on the partnership and explore new avenues."
Biogas for 4,000 households
At a new biogas plant, it will be possible to transform biomass into biogas, which will then be upgraded to bio natural gas, the most eco-friendly type of gas. The upgraded bio natural gas will then be fed into the natural gas network. Preliminary analyses indicate that it could be possible to produce six million cubic metres of natural gas a year, corresponding to the annual consumption of approx 4,000 households, or almost half the households in Kalundborg.
Even after the biomass has been processed at the biogas plant, it can still be used as fertiliser at farms on Zealand, as is the case today.
The parties expect to be ready to make the final investment decision (FID) in the course of the next 12 months, and if it gets the go-ahead, the plant for producing biogas from biomass could be ready for commissioning in early 2018.