From ash to metro

What does Avedøre Power Station's production of heat and electricity have to do with the construction of the Copenhagen Metro? 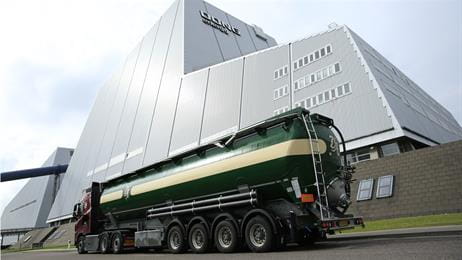 Operating at full load, DONG Energy's Avedøre Power Station near Copenhagen produces between 10 and 15 tonnes of wet ash per hour. 'Wet ash' is the name for the tiny particles of ash that are so light that the smoke would carry them up the stack if they were not captured by huge electrostatic precipitators. But the ash is captured and can be put to good use.
Niels Christian Kjær, Head of Avedøre Power Station, says: "It actually takes seven lorries. Filled to the brim. Every single day. So it's a good thing that one of our by-products can be put to good use somewhere else."
The ash can be reused in the production of concrete and cement, and fully three of the seven lorry loads are used in the construction of the Copenhagen Metro system. Here, the ash is recycled into concrete for the new City Circle Line, which the Metro company expects to open in summer 2019. Comprising 17 new stations and a total length of 15.5km, the project demands a great deal of concrete.
Kjær continues: "This is not the first time that we've delivered wet ash to huge construction projects. We were major supplier of ash to the Great Belt Bridge and the Øresund Bridge."
From smoke to plaster walls
The electricity and heat production at Denmark's largest power station also results in large quantities of plaster. In connection with the smoke being cleaned, the power station produces four tonnes of plaster every hour, which is used in plaster boards. This means that between two and four lorries arrive at the power station every day to collect plaster when the station is operating at full load.
And one final interesting piece of information: Avedøre Power Station boils 551 litres of water per second in its large boilers so ensure hot tap water and warm radiators.
If you want to see the impressive power station up close, you now have a unique opportunity to do so. In connection with Avedøre Power Station's 25th anniversary, DONG Energy invites everyone who is interested to an open day event at the power station on Saturday, 3 October at 10-16.