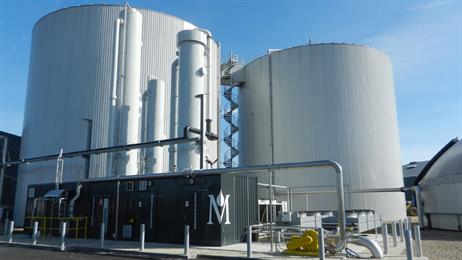 The bio gas plant in Tønder will be operational in 2016. On the photo, you can see a corresponding plant in Horsens.

Bio natural gas is biogas upgraded to natural gas quality and consequently, it can be sold to consumers via the natural gas grid.
In 2011, DONG Energy commissioned Denmark's first upgrading plant at the purifying plant in Fredericia, Fredericia Centralrenseanlæg. In 2014, the next plant was commissioned at Horsens Biogas and at the beginning of 2016, production from DONG Energy's future upgrading facilities at Linkogas a.m. b.a. will begin.
DONG Energy is also the only energy company in Denmark delivering both certified wind power from Danish offshore wind farms as certified bio natural gas from the Danish biogas plants.
In December 2014, ENVO Biogas Aabenraa received an approved EIS from Aabenraa Municipality. This means that a close cooperation with Aabenraa Municipality and the contractor submitting the construction application has been initiated. At the same time, the negotiations related to the sale of the produced bio natural gas amounting to approximately 68 million cubic metres will begin.
The total production of ENVO Biogas Tønder and ENVO Biogas Aabenraa will constitute more than 60% of the annual Danish biogas production. Each plant produces approximately 1.3PJ and the annual production of both plants will total 2.6PJ. By comparison, today, all installed biogas plants in Denmark produce 4.3PJ altogether.
On 28 January 2015, ENVO Bioenergi Tønder A/S and DONG Energy have entered into an agreement according to which DONG Energy will purchase the produced bio natural gas from ENVO Biogas Tønder when the plant comes into operation in 2016. ENVO Biogas Tønder will become Denmark's largest biogas plant with an annual production of 68 million cubic metres of biogas. After the upgrade, the plant is able to produce 35 million cubic metres of bio natural gas (methane) annually. In this way, the consumption of 24.000 households heated by natural gas can be covered by the produced bio natural gas.
ENVO Biogas Tønder will be producing and upgrading the biogas, while DONG Energy will be selling the bio natural gas to consumers connected to the Danish natural gas grid.
It marks an important milestone
Bo Asmussen, CEO of ENVO Bioenergi Tønder, said:
"We're very pleased that we've reached yet a milestone and with the positive and constructive process with DONG Energy and Mette Bindeballe, our legal adviser.  ENVO Biogas Tønder and ENVO Biogas Aabenraa will form two of the most beautiful and most sustainable biogas plants."
ENVO's objective is to become a significant and active player that helps to promote the development of biogas:
Bo Asmussen said: "With this development, many new Danish workplaces will be created in the local area throughout the next couple of years. ENVO will focus on the development of biogas to increase efficiency and promote the expansion of biogas plants in Denmark and in the international market."
Important supplement to wind power
Lars Sprogøe Bentzen, Vice President of Sales B2B DK in DONG Energy, is also pleased with this agreement:
“Throughout a number of years, DONG Energy has entered into more than 130 climate partnerships and by doing so, we've combined our energy consulting services with the supply of certified renewable energy from our offshore wind farms. ENVO is a new and ambitious player in the Danish biogas market, and their production will account for a considerable part of the total Danish biogas production. Thus the agreement strengthens our effort to be able to deliver green energy to our customers. Bio natural gas makes it possible for the customer to cover the total energy demand with certified renewable energy.