DONG Energy receives the award in Leadership in New Energy 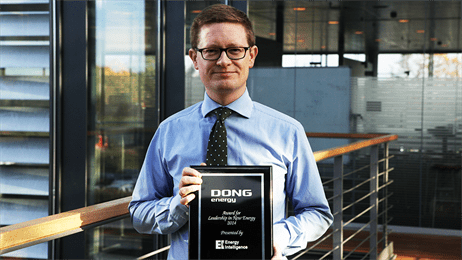 The award’s selection process began with the Energy Intelligence editorial team compiling a list of nominees. The winner was then chosen by a selection committee comprised of independent experts in new energy from the business world complemented by senior energy executives and government officials.
David Pike, Editor of Energy Intelligence’s carbon and renewables information service, described DONG Energy as a company "at the forefront of the energy transition.” Jakob Askou Bøss, Vice President in Corporate Strategy & Stakeholder Relations in DONG Energy, received the award on behalf of DONG Energy.
The award acknowledges a company, that takes the lead in transforming energy production from fossil to renewable energy production.
David Pike said:
“DONG Energy is a perfect example of a company leveraging its offshore oil and gas experience to develop a new sector, offshore wind power. It's a leader in that area and will play a central role in driving down costs.”
The Oil & Money Conference is a high-level international conference visited by the key players in the global oil industry. Three years ago, the organisers decided to present an annual award to a company that is a pioneer in New Energy. Previous recipients include Abu Dhabi-owned investment company Masdar and Spanish electric utility company Iberdrola, and this year, the selection committee decided to give the prestigious award to DONG Energy.
Jakob Askou Bøss said:
"In 2004, DONG Energy was a predominantly up- and midstream gas company. In 2006, we became one of the most coal-intensive utilities in Europe. Today, we are a global leader in renewables, both when it comes to offshore wind and conversion of power plants to sustainable biomass. This award is a recognition of the results we have achieved as a company and it supports our mission of working towards a greener, more independent and economically viable energy system."