DONG Energy has reached an agreement with The Crown Estate to reconfigure the Hornsea zone as part of the Round 3 offshore wind development zones. 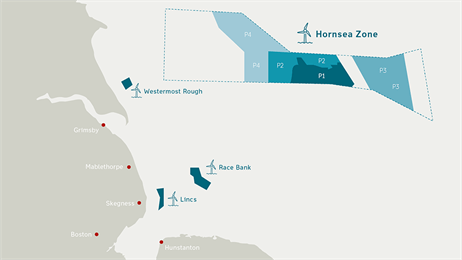 Following its acquisition of the remainder of the Hornsea zone from Mainstream Renewable Power and Siemens Financial Services in 2015, DONG Energy has now concluded its zone appraisal process which has resulted in project-specific agreements for lease being agreed for three projects: Hornsea Project Two, Hornsea Project Three and Hornsea Project Four.

This follows DONG Energy’s recent announcement that it will build the 1.2 gigawatt (GW) Hornsea Project One, which will be capable of powering well over 1 million UK homes.

“We are very pleased to have reached this agreement with The Crown Estate for the Hornsea projects, which highlights once again our absolute commitment to the UK offshore wind market.

“Having just confirmed that we are building Hornsea Project One – the world’s biggest offshore wind farm – we see these projects as a vital part of our post-2020 pipeline”.

Hornsea Project Three, which will shortly be taken forward to external consultation, is estimated to have the potential for 1-2 GW capacity. Hornsea Project Four could add around a further 1 GW.