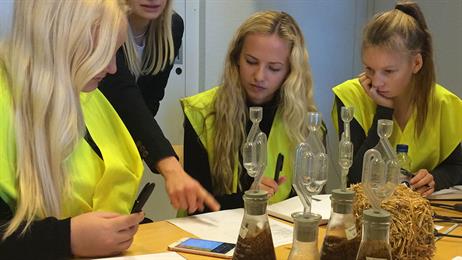 About Girls' Day in Science

Girls' Day in Science is an annual campaign day intended to inspire more girls to pursue a scientific or engineering degree.

The initiative comes from Jet-Net.dk, the nationwide network for cooperation between schools and the business sector. On this day, companies throughout the country open their doors to girls from primary schools as well as lower and upper secondary schools with the aim of giving them the opportunity to engage in practical tasks related to their science and engineering teaching, thereby putting it into perspective. The girls also get to meet the female employees, who can inspire them to discover the job opportunities in the fields of science and engineering.

Denmark needs more qualified labour within science and engineering. But especially women tend to deselect these fields of study, because they do not think that it is something they would be interested in – a view based on myths, and which Jet-Net.dk wants to contribute to changing. In 2015, only one in four of the applicants admitted to the engineering programme were woman – a figure which has not changed since 2007.

On Monday 23 November, DONG Energy, Denmark's largest energy company participated in the nationwide Girls' Day in Science for the first time. The aim was to give second-year students from the technical upper secondary school at EUC Lillebælt with an interest in science a unique insight into how a degree in science can lead to a job in one of the largest companies in Denmark.

Today, the girls from the technical upper secondary school visited DONG Energy hoping to learn something about green energy and what it is like working at DONG Energy. After a brief welcome, the girls were introduced to the production of bioethanol, which plays an increasing role in DONG Energy's conversion of its system to green energy. Together with engineer Anna Frederike Gossmann, the girls had the opportunity to conduct experiments with enzymes used in the manufacture of fuel from straw. After lunch, DONG Energy's largest focus area – offshore wind energy – was on the agenda – in the capable hands of engineer Stine Andersen, Manager at DONG Energy. The girls were tasked with measuring the environmental impacts of establishing and operating an offshore wind farm, and – of course – Stine also told them about how she ended up at DONG Energy.

"It's been very interesting to visit DONG and to see for ourselves how you can use the different science degrees. I'm particularly interested in a company like DONG, because I'm very concerned about how we treat our planet and the environment in general. And that's something DONG puts a great deal of effort into."

Important to reach the young people

The reason DONG Energy has decided to open its doors to the girls from EUC Lillebælt is to show them that there are companies in their local area with jobs related to science which could be relevant to them.

"We need both young men and young women at DONG Energy. We really hope that these girls have learned something today, and that we've helped to give these young people a realistic insight into what we do. Hopefully, we've inspired the girls to see new opportunities in their own futures."
It is part of DONG Energy's strategy to draw even more attention to, also in relation to young people, why the company is an attractive workplace.

Anna-Lena Jeppsson, who had the pleasure of meeting the girls when she opened the event and welcomed the participants, continued:

"As a large company in Denmark, we must also take responsibility for raising awareness of the career opportunities that we offer. We have to meet the young people where they are – both boys and girls – to make them realise the benefits of choosing a field of study which can lead to a job at DONG Energy. Finding qualified labour won't be any easier in the future, so this is also a golden opportunity for us to inform young people about the possibilities at DONG Energy."

The visit at DONG Energy in Skærbæk ended at 15:30. The last thing on the agenda was an interesting presentation by Mette M. U. Juliussen, Head of Operations Quality, Wind Power, who also talked about her background and DONG Energy's offshore wind farms.