Along with a number of other companies, DONG Energy wrote a debate piece for the Danish newspaper Jyllands-Posten. Together, they encourage EU action for the benefit of the climate, Danish companies' export potential and growth in Denmark. 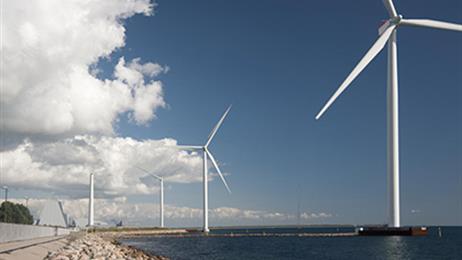 Co-authors of the debate piece

Mette Refshauge
Senior Vice President
Danfoss
Jakob Askou Bøss
Vice President
Corporate Strategy & Stakeholder Relations
DONG Energy
Kim Nøhr Skibsted
Group Vice President
Grundfos
Tina Sejersgård Fanø
Vice President
Novozymes
Henrik Frank Nielsen
Division Managing Director
Europe Division
Rockwool
Ingrid Reumert
Vice President
Stakeholder Communications & Sustainability
Velux
Morten Dyrholm
Vice President & Head of Global Public Affairs
Vestas
Denmark is European champion in energy exports: In 2013, as much as 11 per cent of the total Danish exports came from the energy sector. More than half of the energy exports covers green solutions and this sector saw an increase in exports of 17.6 per cent from 2012 to 2013.
If you dig deeper into the figures, you will see that there is a concentration of sales to neighbouring markets in Europe. From a total of exports amounting to DKK 67.6 billion, exports to Germany and the UK together represent a value of DKK 25.1 billion.
Our neighbouring markets ensure Denmark's position as a leader within energy savings and renewable energy.
Modern and efficient pumps, insulation, windows and thermostats reduce energy consumption across Europe, and together with wind turbines and state-of-the-art biofuels, they all contribute to ensuring security of supply and reducing our dependence on energy imports from eg Russia. In addition, the establishment of renewable energy and energy savings in buildings and across industries contributes to job creation in Europe.
Important for growth
If the positive trend for the Danish energy exports is to continue, it requires that the long-term political framework is in place. Therefore, we take great interest in the EU summit on 23 and 24 October where heads of state and government will agree on the overall direction for the EU energy and climate policy.
It is a crucial decision for the climate, but it is also important for the Danish companies' export opportunities and, thus, for the growth in Denmark.
The energy sector's investment horizon goes 20-30 years ahead. Consequently, we need the EU heads of state to lay down an ambitious framework going beyond 2020 as soon as possible so that we can secure investments in the green energy transition in Europe.
Change in emissions trading system
We encourage the Danish government to work for an ambitious EU agreement. It is important that the agreement includes binding targets up to 2030, ie at least a 40 per cent reduction in CO2 emissions, at least 30 per cent renewable energy as well as a target for energy efficiency which is higher than the 30 per cent proposed by the European Commission in July. In addition, it is important to implement measures in favour of a continued green conversion of the transport sector going beyond 2020.
Furthermore, the planned changes to the EU emissions trading scheme, ie the so-called market reserve, are expected to come into force in 2017 at the latest. The price of CO2 must drive investments in renewable energy and energy efficiency. This is not the case today as emission of one tonne of CO2 costs only around DKK 45.
It should also be crystal-clear that an ambitious climate policy makes sense in terms of geopolitics. Renewable energy and a more efficient energy consumption are crucial to reducing EU dependence on imports. In 2012, in the EU, we imported 86 per cent of the oil, 66 per cent of the gas and 42 per cent of the coal needed for our consumption. So all in all, we spend approximately DKK 10 billion on imported energy in the EU - every single day.
Denmark can show the way
Denmark can show the way for the rest of Europe. EU's annual competitiveness report stresses that by means of its ambitious energy and climate policy, Denmark has reduced the energy sector's fuel costs by 40 per cent in the period from 2008 to 2012.
There are two reasons for that: we use green energy and we use less energy. Two factors that benefit the entire society end strengthens our competitiveness.
In time, this will also be possible in the rest of Europe, but it requires that the European state leaders at the summit this month set ambitious targets for the period up to 2030.