All the children loved the wind

Fun activities and learning about the wind told in a child's perspective. On Saturday 4 October, 'Love the Wind' took place in LEGOLAND®. 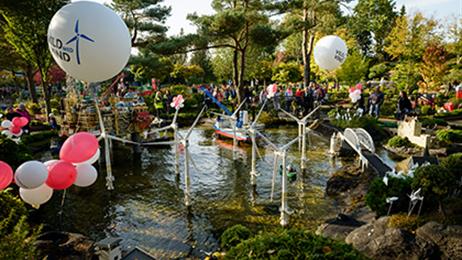 A partnership focused on play-and-learn

The area 'Energy in Miniland' is a cooperation between DONG Energy and LEGOLAND and it con-sists of a section of an offshore wind farm, a production platform and an information board.

The information board has just been updated with specific information about the Hejre oil production platform, and you can participate in a quiz about Hejre and send a postcard to a friend.

Children and adults poured in from the entrance to LEGOLAND®. Everyone was welcomed with a smile and small paper wind turbines were handed out to the children. The sun was high in the sky and the wind set off the propellers in the small wind turbines that all the children were running around with. From the very start, the focus was on the 'Love the Wind' event which was organised jointly by LEGOLAND, A2SEA, Siemens and DONG Energy.
Helene brought her mother, Tina Flarup, and her baby brother, Daniel, to see the day's event 'Love the Wind'.

Helene Kjeldsen was enthusiastic: "We've just been over to see the production platform in Miniland. Now, I'm looking forward to seeing Kåre from Ramasjang, because I'd like to tell him how big a fan I am."

In the tents on the site, you could see how much energy that you could generate by cycling, you could build your own LEGO® wind turbine, see Kåre from the Danish children's show 'Store Nørd' and in the big 'Wind Challenge', you could guess at which speed the wind is blowing. 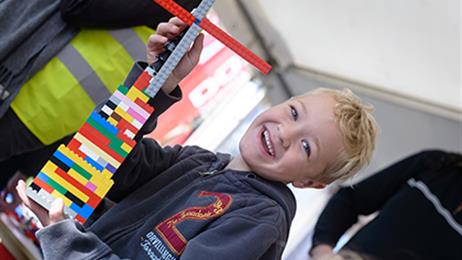 Mikkel Sørensen was proud of the offshore wind turbine he built with LEGO bricks.

"We created a fun and educational day where children and adults got a better understanding of how we can use off-shore wind power's immense forces, just by playing and participating in many interesting wind power activities."

In one of the tents, Anton Andersen pedalled intensively to generate enough energy to keep a 'Gamer PC' powered.

This is where competitive spirits thrive and the enthusiasm spread between children and adults who pedalled hard and built creative LEGO wind turbines in a myriad of colours. As Kåre from 'Store Nørd' jumped onto the stage, families poured into the event area.

Kåre from 'Store Nørd' showed fire experiments on the stage:

"Are you ready for experiments, explosions and a lot of fun secrets?"

The children all shouted an eager 'YES', and the show with fire, water and wind power was kicked off with a bang. The children were delighted and surprised and at the same time, they learned how forces of nature can be used to make fun energy experiments.