30-year anniversary with focus on safety and environment 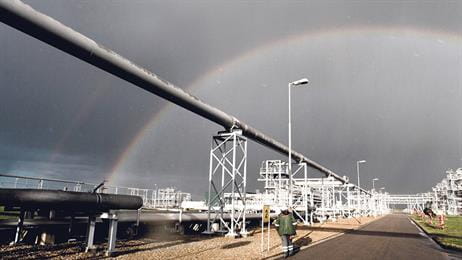 The American consultancy company Juran Global has several times elected Nybro Gas Treatment Plant as one of the world's most safe and efficient plant.This has happened repeatedly in several benchmark surveys in which, apart from safety, emphasis has been on financial aspects, environment, working environment and optimisations.

It was the oil crisis in 1973 that initiated the plans about a Danish natural gas infrastructure. The crisis hit Denmark as a blow with a sledge hammer. The dependence on oil import was to be significantly reduced and the Danish Parliament voted the construction of a natural gas grid in 1979. The gas was to flow from fields in the North Sea to the coast by the village of Nybro close to the town of Varde. And from here to other parts of Jutland, Funen and Zealand.

Nybro Gas Treatment Plant became a cornerstone in the new infrastructure, because the gas quality had to be up to standard before it could serve as heating in homes and ensure fuel for production for many companies.

The American consultancy company Juran Global has several times elected Nybro Gas Treatment Plant as one of the world's most safe and efficient plant. Together with the rest of the plant's employees, Finn Hedegaard and Henrik Bay, the plant's daily managers, are proud of the results.

"All employees have a share in the results, and it's certainly a feather in my cap that we can match the large companies such as BP, Norsk Hydro and Shell when it comes to safety and efficiency. We've delegated areas of responsibility and many tasks and for the individual employee, this has given a sense of ownership, both for the task and the plant."