The conversionof Skærbæk Power Station to ensure green electricity and heat to the inhabitants in the Danish Triangle Region is initiated today. 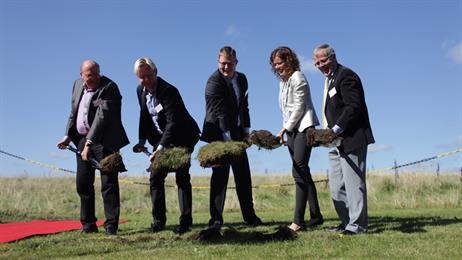 The heat from Skærbæk Power Station constitutes two-thirds of the district heating production which TVIS has supplied to the households and companies in the Danish cities Fredericia, Kolding, Vejle and Middelfart for 27 years - reliable, inexpensive and environmentally friendly.

The conversion of Skærbæk Power Station paves the way for the establishment of a new, large and green power and heat production in the Danish Triangle Region, making the total heat supply to the Danish Triangle Region almost CO2 neutral. At the same time, the price of the heat will be cheaper, approximately DKK 600 per household on an annual basis, and the reliability of supply will be strengthened in connection with the commissioning of more production facilities where it is possible to choose between several fuel types. This is in accordance with the political wishes locally, nationally and internationally.

Today, Rasmus Helveg Petersen, the Danish Minister for Climate, Energy and Building, cuts the first sod for the conversion of Skærbæk Power Station together with the mayors of the Danish cities Fredericia, Vejle, Kolding and Middelfart. The power plant will be converted to use wood chips as primary fuel instead of natural gas in future.

"The conversion of Skærbæk Power Station means that as of 2017, it will be able to supply green district heating to almost 200,000 inhabitants in the Danish Triangle Region and green electricity to the rest of Denmark. So it's an important event for many people, when the Minister today cuts the first sod for the conversion."

The power stations are getting greener

The power stations are an important part of Denmark's conversion to green energy. The Danish power stations supply district heating to 3.4 million Danes and ensure a stable power supply to the Danes when the sun is not shining and the wind is not blowing. Therefore, they are converted from fossil fuels, such as coal and gas, to biomass in order to provide a significant contribution to a fossil-free electricity and heat supply in Denmark.

"I'm pleased to see that our ambitious energy agreement from 2012 has contributed to speeding up the green conversion of the power stations. We now see that many power stations are replacing coal with sustainable biomass. This contributes significantly to us achieving the government's climate targets of a 40 per cent reduction by 2020. Skærbæk Power Station is a really good example of how power stations can do something good for the climate."

Compared to coal, DONG Energy's use of biomass at the Danish power stations last year has saved the climate for the same amount of CO2 as that emitted by more than 255,000 Europeans during an entire year. In 2013, 18% of the energy from DONG Energy's power stations originated from biomass. The target is 50% in 2020.

The conversion will start today and from the beginning of the 2017 heating season, the radiators in eastern Jutland will receive green heating.

Leif Skov, Chairman of the Board of Directors of TVIS, the heating transmission company in the Danish Triangle Region, said:

"We've decided that a conversion of Skærbæk Power Station is the best solution to ensure stable district heating which the inhabitants of the Danish Triangle Region can continue to take for granted. We want to push the development forward towards a greener Denmark at a competitive district heating price."

The costs of the conversion are approximately DKK 1.8 billion and it is expected to generate approximately 600-700 jobs distributed over the construction period. The workplaces will primarily be created in the metal fabrication as well as the building and construction sector and will include, among other things, the construction of a large wood chip storage facility, new cranes, transport systems and rebuilding of the harbour.