140 tonnes heavy duty transport through the city centre of Fredericia

On 4 and 5 September, a 38 meter long pipe and a 21 meter long container successfully scraped through the narrow streets of Fredericia. 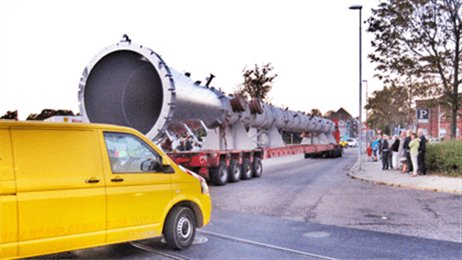 The towers
The towers are delivered to the crude oil terminal in Fredericia which is being expanded so that it is ready to handle the new oil quality from the Hejre field when it comes into operation in 2017 in the Danish part of the North Sea.

Two transporters were loaded with several tonnes when a distillation tower and a circulation tank were transported through the city centre of Fredericia. The starting point was the port of Fredericia and the destination was DONG Energy's crude oil terminal just outside the city.

It was the utility company Trefor and Give Sværgods (a Danish company specialising in the transport of heavy cargo) which were in charge of the unusual and sizeable cargo. The cargo was accompanied by police escort, and an audience had turned up to see the spectacular cargo cross the streets. Prior to the transport, each turn had been well considered in advance and every meter had been measured in detail. Traffic lights and street lighting had been dismantled, and no parking zones had been implemented several places in the city. 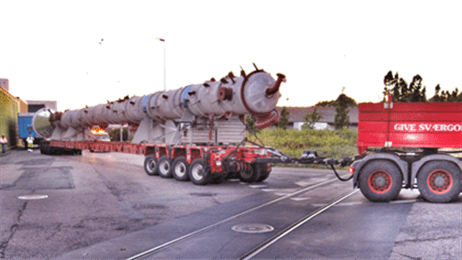 Previously, the two distillation towers had been transported to DONG Energy's crude oil terminal, and Thursday's cargo transport was the third and last delivery of this type.