The conversion of Asnæs Power Station is kicked off today, and in two years' time, the power station will be ready to say goodbye to coal. 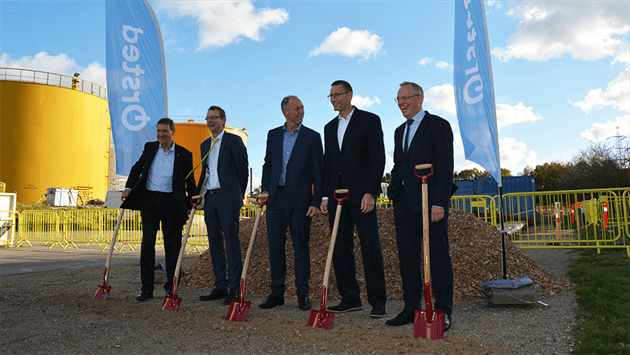 Today, Martin Damm, the Mayor of Kalundborg, and executives from Novo Nordisk, Novozymes, Kalundborg Forsyning and our company cut the first sod for the conversion of Asnæs Power Station. The power station will be converted to using sustainable biomass instead of coal in future.

"By 2023, we'll have phased out all use of coal at our power stations. With the conversion of Asnæs Power Station, we and our customers are taking an important step towards becoming coal-free," says Thomas Dalsgaard, Executive Vice President and CEO of Bioenergy & Thermal Power.

The conversion from coal to wood chips and other sustainable types of biomass at Asnæs Power Station will result in annual carbon reductions of up to approximately 800,000 tonnes. This corresponds to the annual carbon emissions from more than 400,000 cars and thus contributes significantly to Denmark's green conversion.


Due to a 20-year agreement between Novo Nordisk, Novozymes, Kalundborg Forsyning and our company, it's become possible to fund the DKK 1.2 billion conversion of Asnæs Power Station. The conversion ensures a reliable supply of green heat and process steam for Kalundborg's citizens and industrial sector in future.

"Our steam and heat customers in Kalundborg have just as ambitious targets to reduce their carbon emissions as we have, and I'm happy that together we can ensure a greener energy supply to the area," says Thomas Dalsgaard.

The biomass-fired plant will be built as a separate unit in new buildings at Asnæs Power Station. The plant will be connected to the existing district heating and process steam networks and the electricity grid. The conversion also includes, among other things, a new conveyor system and wood chip storage.

Preparations for the construction work have begun, and today, the conversion was officially initiated. The power station is expected to be ready to supply green district heating to Kalundborg by the end of 2019.