Electricity has been generated for the first time at DONG Energy’s Race Bank Offshore Wind Farm, located off the North Norfolk coast. 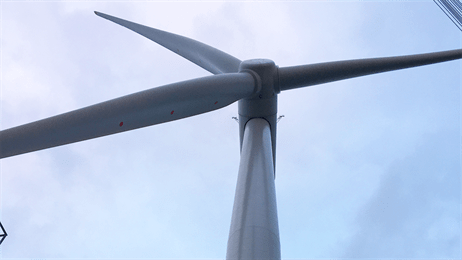 With the initial turbines installed, power from the first turbine is now being exported to the national grid.

Race Bank consists of 91 Siemens 6 megawatt (MW) turbines, including the first ever wind turbine blades manufactured at the Siemens blade factory in Hull which are expected to be installed later in the year.

Approximately two thirds (around 180) of the blades at Race Bank will come from the Siemens facility in Hull.

"I’m delighted we’ve reached first power at Race Bank, which is an important milestone that proves every part of the transmission and generation equipment at the wind farm is successfully working. Construction is progressing well and on schedule.”

“It will be great to see the first blades from Hull loaded out and installed on the remaining turbines in the coming weeks as well.”

Once all 91 turbines are installed, Race Bank will be capable of generating 573MW of electricity – enough capacity to meet the annual electricity demands of over half a million UK homes.

Construction of Race Bank is being managed from DONG Energy's construction base in the Grimsby Fish Docks.

Last year, DONG Energy announced plans for a GBP multi-million investment in Grimsby to create the UK's largest offshore wind operations and maintenance hub, which will serve Race Bank once it becomes operational.