Today, DONG Energy announces that its target to reduce greenhouse gas emissions by 96% by 2023 is now officially approved by the Science Based Target initiative as aligned with climate science. The target is significantly more ambitious than what is required by the Paris Agreement. 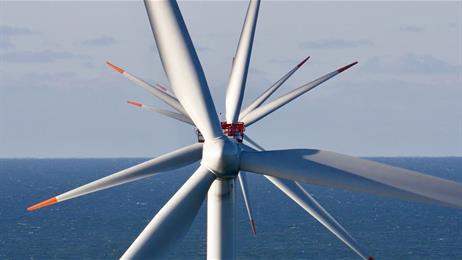 Halting climate change requires a fundamental transformation of the way we lead our lives on Earth to ensure a habitable planet for future generations. DONG Energy joins only a handful of energy companies globally who have taken a forward-thinking stance on climate change by adopting science-based targets. A science-based greenhouse gas reduction target is in line with keeping the global temperature increase below 2 degrees Celsius, thereby avoiding severe climate change consequences.

About the Science Based Targets initiative

The Science Based Targets initiative champions science-based target setting as a powerful way of boosting companies' competitive advantage in the transition to the low-carbon economy. It is a collaboration between CDP, World Resources Institute (WRI), the World Wide Fund for Nature (WWF), and the United Nations Global Compact (UNGC) and one of the We Mean Business Coalition commitments. The initiative defines and promotes best practice in science-based target setting, offers resources and guidance to reduce barriers to adoption, and independently assesses and approves companies' targets.

Alberto Carrillo Pineda from the Science Based Targets initiative said:

“It is encouraging to see DONG Energy set an emissions reduction target that aligns its business strategies with the rate of decarbonization needed from the energy sector in order to avert the worst impacts of climate change. With its science-based target, DONG energy is taking a leading role in the transition to the low-carbon future. Its target demonstrates to customers, investors and peers that the company is committed to creating long term value and playing its part in achieving the goals of the Paris Agreement."

The transformation of a business

Of all European energy companies, DONG Energy has come the furthest in the transition from fossil fuels to renewable energy. It is now among one of the first energy companies globally to get its greenhouse gas reduction target approved as science-based.

“The way we produce energy is changing rapidly. In ten years, DONG Energy has transformed from one of the most coal-intensive utilities in Europe to a global leader in renewable energy. In 2016, green power and heat accounted for half of our energy generation, and we have more than halved our greenhouse gas emissions since 2006.”

He continues: “By 2023, we want to achieve a 96% reduction in our greenhouse gas emissions per kilowatt-hour produced compared with 2006. We are very proud to announce today that this target has been approved as being scientifically in line with what we need to do as a company to tackle climate change. With this reassurance, we now know that we are doing our part to support the UN Sustainable Development Goal on climate action as well as the Paris Agreement. That is a big deal to us.”

27 years ahead of schedule

DONG Energy’s transformation is driven by investments in offshore wind and sustainable biomass. By 2025, the company has an ambition to be able to supply green electricity from offshore wind to around 30 million people. And the company has set a target to be completely rid of coal by 2023. In addition, it has recently divested its oil and gas business, affirming its transition into a pure renewable energy company.

The result is an ambitious commitment to low carbon energy production. In fact, with its science-based target, DONG Energy is 27 years ahead of schedule compared to the 2-degree scenario for the energy sector as projected by the International Energy Agency. 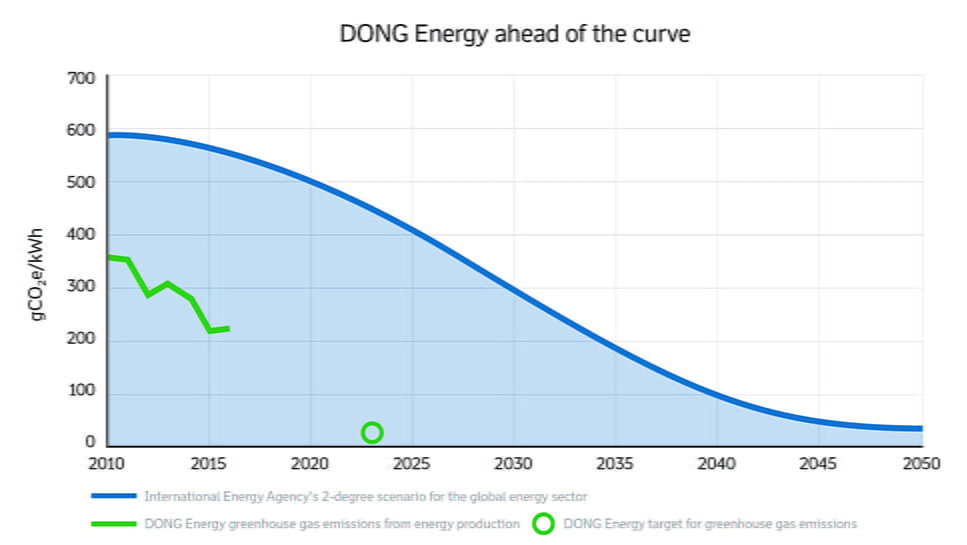 With their reduction target, DONG Energy is 27 years ahead of schedule compared to the 2-degree scenario for the energy sector as projected by the International Energy Agency.