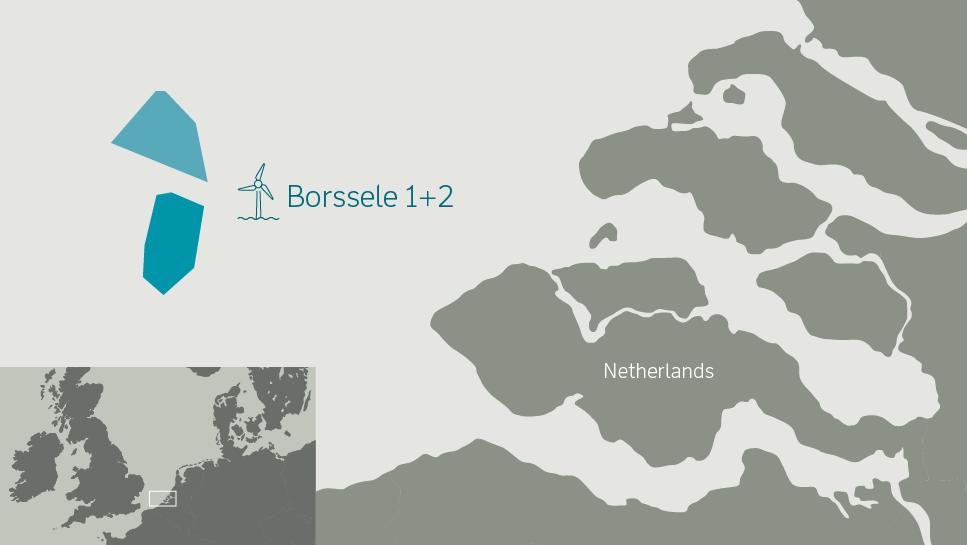 Persbericht DONG Energy wint tender windparken op zee
The Netherlands’ Minister of Economic Affairs has awarded Ørsted the concession to build The Netherlands’ offshore wind farms Borssele 1 and 2. Ørsted won the concessions with an average bid strike price, excluding transmission costs of 72.70 EUR per MWh during the first 15 years of the contract. After that, the wind farms will receive the market price.

Only four years ago, Ørsted set an ambitious 2020 cost target of reaching EUR 100 per MWh over the life-time of a wind farm – the so-called levelized cost of electricity – including transmission costs. This target, which was later adopted by the offshore wind industry, has now been reached.

Executive Vice President and Head of Wind Power in Ørsted, Samuel Leupold, says: “Winning this tender in a highly competitive field of bidders is another proof of our market-leading position and our business model which builds on continued innovation, industrialisation and scale. With Borssele 1 and 2, we’re crossing the levelized cost of electricity mark of EUR 100 per MWh for the first time and are reaching a critical industry milestone more than three years ahead of time. This demonstrates the great potential of offshore wind.”

Ørsted will, in accordance with the Dutch tender regulation, build Borssele 1 and 2 within four years from today with a flexibility of one year. The wind farms’ capacity of two times 350MW will translate into supply of CO2-free electricity covering the annual power consumption of approximately one million Dutch households.

Country Manager for Ørsted Netherlands, Jasper Vis, says: “The Dutch government has introduced an ambitious, long-term development plan for offshore wind. The Borssele concessions mark a milestone in the Netherlands’ shift towards green energy, and we look forward to bringing our more than 20 years’ experience with offshore wind into these projects.”