DONG Energy has decided that by 2023, coal will no longer be used as fuel at the company's power stations. The decision is a result of the company's vision to lead the way in the transformation to a sustainable energy system and to create a leading green energy company. 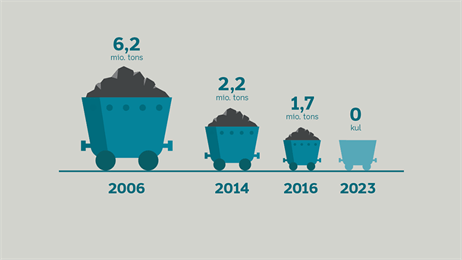 Since 2006, DONG Energy has reduced its coal consumption by 73 per cent, and the company has now decided to entirely phase out the use of coal. By 2023, the use of coal as fuel at DONG Energy's power stations will have stopped completely. The power stations will be replacing coal with sustainable biomass.
"We've decided to take the final step and phase out the use of coal at all our power stations. The future belongs to renewable energy sources, and therefore we're now converting the last of our coal-fired power stations to sustainable biomass. The decision is in line with our vision to lead the way in the transformation to a sustainable energy system and create a leading green energy company," says Henrik Poulsen, CEO.
Coal is still one of the most commonly used fuels worldwide. Around 40 per cent of the world's electricity is produced from coal, even though coal is the fuel emitting the most CO2. DONG Energy is the first among the large European energy companies to decide to phase out coal for the production of electricity and heating completely.

Since 2006, DONG Energy has reduced its coal consumption by 73 per cent through a reduction in the number of power stations as well as conversions to sustainable biomass instead of coal. At the same time, the company has constructed more production capacity based on offshore wind than any other company in the world. This means that in just one decade, DONG Energy will have gone from being one of the most coal-intensive utilities in Europe to being among the greenest energy companies in Europe.
Since 2002, DONG Energy has used wood pellets and wood chips as fuel at both Herning Power Station and Avedøre Power Station, and over the years, the company has increased the share of biomass at the two power stations. In 2016, both Studstrup Power Station near Aarhus and Avedøre Power Station near Copenhagen were converted to run 100 per cent on wood pellets and straw, and during the spring of 2017, Skærbæk Power Station near Fredericia will be able to run 100 per cent on wood chips.
With DONG Energy's decision to stop all use of coal by 2023, a future solution must now be prepared for the company's remaining two coal-fired power stations: Asnæs Power Station and Esbjerg Power Station. DONG Energy is in dialogue with the heating customers in Kalundborg and Esbjerg regarding the possibilities of converting the two power stations to use wood chips as fuel instead of coal when the existing heating agreements expire at the end of 2017 and 2019, respectively.

More than half of Denmark's reduction in CO2 emissions

Denmark's total annual emissions of greenhouse gases have been reduced by approximately 25 million tonnes CO2 from 2006 to 2016, and DONG Energy's share of the reduction amounts to approximately 53 per cent. As a result of the decision to completely phase out coal, DONG Energy expects its share of Denmark's total reduction to remain at this level from 2016 to 2023.
In 2023, the company will have reduced its annual CO2 emissions by almost 18 million tonnes compared to 2006 levels. The total reduction corresponds to the annual emissions of more than 9 million cars. In 2023, the company's electricity and heating production will emit approximately 0.5 million tonnes CO2 annually, primarily from gas-fired boilers covering peak loads in the district heating system and situations with lack of power.

Wood pellets and wood chips from sustainable forestry provide considerable CO2 reductions compared to using coal and gas. The wood pellets and wood chips primarily come from residual products such as branches, twigs and thinning trees as well as from sawdust from the furniture and saw mill industries.
"When we use sustainable biomass, we achieve significant CO2 reductions in comparison to when we use coal and gas. Our wood pellets and wood chips originate from forest areas with continuous reforestation, meaning that new trees grow up to absorb the CO2 emissions created during the combustion of the biomass," says Henrik Poulsen.
The decision means that DONG Energy is now initiating the final stage of the conversion, so that by 1 January 2023, the company will no longer generate electricity and heating based on coal.


Get the Full press release here