The conversion of one of the world's most efficient power station units will result in green heating for 150,000 Danish households in the Greater Copenhagen area. 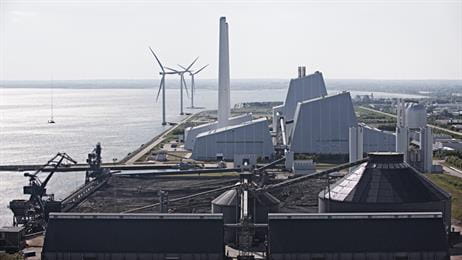 Since April 2013, engineers and workmen have put a lot of efforts into the conversion project at Avedøre Power Station. Located outside of Copenhagen, Denmark's largest CHP plant has become greener as for the past 18 months, one of the plant's two power plant units has undergone a conversion. The conversion, which is now finalized, is financed by DONG Energy and the heat supply companies VEKS and the Metropolitan Copenhagen Heating Transmission Company (CTR).

With this conversion, unit two at Avedøre Power Station increases its biomass capacity from 80 to 100 per cent and expects to produce district heating based on biomass for almost 150,000 Copenhagen homes as well as power corresponding to the annual consumption of 450,000 households.

In April last year, VEKS and CTR entered into an agreement with DONG Energy covering unit two of Avedøre Power Station until 2028. The agreement contributes significantly to Copenhagen's ambition of becoming carbon neutral in 2025 and involves the recently completed conversion of unit two. The conversion which costs approximately DKK 100 million comprises, among other things, a new wood pellet grinding mill and additional capacity for transporting the wood pellets from the harbour to the boiler.

"The conversion of unit two is yet another step in the conversion of our power stations. Our target is that at least half of the electricity and heat generated at our power stations in 2020 will be based on sustainable biomass instead of coal and gas. This contributes significantly to reducing Denmark's CO2 emission at the same time as we ensure a continued high level of reliability of supply so that the Danes always have power in their sockets and heat in their radiators."

Compared to coal, DONG Energy's use of biomass at Danish power stations last year alone has saved the climate for the same amount of CO2 as that emitted by more than 255,000 Europeans during an entire year. In 2013, 18% of the energy from DONG Energy's power stations originated from biomass. The target is at least 50% in 2020.